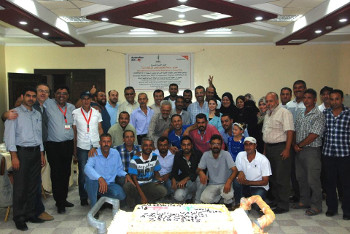 (Gaza, 31 of August 2015) – the Union of Agricultural Work Committees concluded “Strengthening Community Resilience In Gaza Strip” project, which is funded by the Australian government through the Australian Agency for International Development initiative. The finishing ceremony was organized by UAWC with a presence of representatives of the World Vision Foundation to honor 36 members of the fishing committees.

UAWC’s Deputy Chairman of the Board Directors, Jamil Ismail, stressed on the importance of the integrated role between members of the agricultural and fishing committees, World Vision organization, and the Australian Agency for International Development. This project is one of the most important projects in terms of its service diversity, its widespread target groups, and its compatibility with UAWC’s objectives to strengthen Palestinian farmers’ steadfastness, he added.

UAWC’s director in Gaza, Mohammed Al-Bakri, mentioned that UAWC will continue to support the agricultural community, and will continue defending Palestinian farmers right to access and control of their natural resources, build the capacities of farmers, and strengthen the spirit of voluntary work in the Palestinian society especially among farmers and fishermen. Moreover, Al-Bakri pointed that UAWC is currently working on the preparation of the third phase of the project.

The project’s manager, Wesam Shawa, praised the role of agricultural committees’ members in the implementation of the activities and the connection with the target groups. Accordingly, the project was able to reach more than 2,500 families in Rafah, Beit Lahiya, and Beit Hanoun.

It should be noted that the duration of the project was from 2010 until 2015; and the main objective was to improve the standard of living for farmers and fishermen, build their capacity, and enhance their food security.