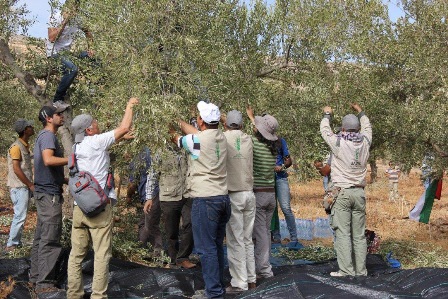 (Ramallah, November 5, 2015)- the Union of Agricultural Work Committees, numbers of local and international volunteers, students from Al-Quds University- Beit Hanina and Birzeit University, members of agricultural committees, and Doma and Turmusaya ‘s citizens, participated in the success of UAWC’s olive harvest campaign under the banner “Like olive trees’ root, we resist”.

The UAWC’s Acting Director, Fuad Abu Saif, confirmed UAWC’s olive harvest campaign came as support of olive farmers since it targeted areas whose farmers cannot reach their lands and their trees in this season alone because of settlement and settlers’ activities while pointing out that what is happened with Dawabshah Family is the greatest example of the occupation and setters’ crimes which target all aspects of Palestinian society. He added that these campaigns aimed to deliver a message for farmers that we stand in solidarity with their struggles, and everything reinforced their steadfastness on his land.

Abu Saif explained that this season comes within exceptional circumstances; the Palestinian people are rising up now, and our participation today is a real participation in this Intifada, which are inclusively located in all over West Bank, the occupied Palestinian land in 1948, and particularly Jerusalem. Thus, this is a real and practical participation by UAWC with its farmers, and local and international volunteers who came from different countries around the globe.

The UAWC launches an olive harvest campaign each year to strengthen the farmers’ steadfastness and protect them from the Israeli forces and settlers violations. The presence of the international volunteers along with the Palestinian academics and students lowers the severity of the Israeli violations. The presence of activists can reduce the risk of extreme violence from Israeli settlers and army and supports Palestinians’ assertion of their right to earn their livelihood. In addition, The Olive Harvest Campaign raises the voice of Palestinian farmers and reaches their struggles to the world, and provides a wonderful opportunity to spend time with Palestinian families in their olive groves and homes. While reinforcing that the UAWC will always support and protect Palestinian farmers until they gain their rights in food and land sovereignty.

It should be noted that “Like olive trees’ root, we resist” campaign comes within “Defend our right” project which is funded by Norwegian People’s Aid, and it will remain in particular in villages whose farmers cannot reach their lands and their trees in this season alone.