Home » “WTO Kills Peasants! 21 Years is Enough!! WTO Out of Agriculture!!!” La Via Campesina to step up its resistance during the XI Ministerial Conference

09 December 2017: A large delegation of La Via Campesina comprising peasants, rural workers, indigenous peoples, women and youth from around the world will converge outside the venue of the 11th Ministerial Conference of the World Trade Organisation (WTO), which is scheduled to take place in Buenos Aires, Argentina from the 10th to13th December.

During the week of the conference, La Via Campesina (LVC) will mobilise, organise and join social movements and allies to expose the devastative effects that WTO has had on peasant agriculture and to reiterate our long-standing demand of 21 years, to oust the multilateral trade body from any discussions and decisions regarding agriculture. 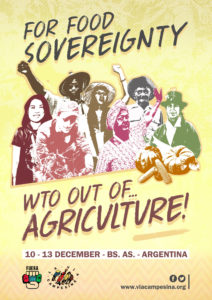 La Via Campesina, a global peasant movement with more than 180 member organisations from 79 countries, has consistently demanded to take agriculture out of the WTO’s scope. Instead it has demanded a systemic change that brings about food sovereignty to the worlds peoples. Once again the rallying call from the global peasants’ movement is “For Food Sovereignty, WTO Out of Agriculture!”.

Since its beginnings in 1995 as derivative of General Agreement on Tariff and Trade (GATTs), the World Trade Organization has promoted the most brutal form of capitalism, better known as trade liberalization. At successive Ministerial Conferences, the WTO has set out to globalise the liberalisation of national markets, promising economic prosperity at the cost of sovereignty. In more or less the same terms, by its “liberalization, deregulation and privatization”, which is called Package of Neoliberalism, WTO has encouraged the multiplication of free trade agreements (FTAs) between countries and regional blocs, etc. In this context, with help from governments that have been co-opted, the world’s largest transnational corporations (TNCs) continue to expand globally and are blatantly undermining democracy and all of the institutional instruments that are meant to defend the lives, the territories, and the food and agricultural ecosystems of the world’s peoples.

Through AoA (Agreement on Agriculture) regulated in the WTO, peasant communities become the most disadvantaged because they have minimal capital resources and little or no protection from national governments as WTO prohibits any protection that stand in the way of market liberalisation. Its role was replaced and eroded by corporations with large capital resources, slowly forming a monopoly scheme. As a result, peasants have to deal with dangerous implications such as land grabbing, criminalization, environmental pollution and the importation of agricultural products.

In the previous Ministerial Conference (MC) in Nairobi in 2015, WTO had made six decisions on agriculture, cotton and issues related to LDCs. The agricultural decisions cover commitment to abolish export subsidies for farm exports, public stock-holding for food security purposes, a special safeguard mechanism for developing countries, and measures related to cotton. Decisions were also made regarding preferential treatment for least developed countries (LDCs) in the area of services and the criteria for determining whether exports from LDCs may benefit from trade preferences.

In the 11th Ministerial Conference the WTO wants to return to the subject of agriculture in relation to public stock-holding, to put an end to small-scale fishing, and to make progress with multilateral agreements such as the misnamed General Agreement on Trade in Services (GATS). Notwithstanding the misleading protectionist statements coming from the developed countries, the WTO will meet again to try to impose the interests of capital at the cost of Planet Earth, of the democratic aspirations of the world’s peoples, and of life itself.

During these 21 years of struggle against the WTO, the world’s peoples have resisted its attempt to globalize everything, including the food and agricultural systems, for the benefit of the TNCs. Our struggles have been the biggest impediment to the advance of the WTO. Our resistance to market liberalisation under this neo-liberal regime has continued since the Uruguay round conducted within the framework of the General Agreement on Tariffs and Trade (GATT). Ever since, La Via Campesina has mobilised against almost all of the Ministerial Conferences since Seattle (1999) and Cancún (2003) – where our brother Lee Kyung Hae, holding a banner declaring that “The WTO kills peasants”, sacrificed his own life – and up to Bali (2013) and Nairobi (2015).

This week, our delegation in Buenos Aires will join the Peoples’ Summit ‘WTO Out! Build Sovereignty’ and denounce the WTO as the criminal organization that it is and will raise our flag of Food Sovereignty. We will denounce all governments, which, after having understood that the WTO had been weakened, resorted to mega free trade agreements, bilateral and regional, that threaten to annihilate our food systems, just as the WTO has done in the last two decades.

We will talk about the peasants who died due to the WTO and expose to the people of the world that hundreds of millions of people have died of starvation and poverty due to its free trade polices. The WTO is nothing more than an interest group of transnational monopoly capital and sympathetic governments colluding with it. The various agreements and treaties of the WTO have driven peasants and small farmers who have been producing food in rural areas. It has destroyed rural communities and has caused food crises and food contamination. We demand that the WTO cease all discussions on agriculture and stop the its attempts to suppress peoples’ food sovereignty.
Food is the universal right of everyone. Food sovereignty is the right of all peoples to define their own food system and puts food producers in the centre of it. Our alternatives for food sovereignty will save Mother Earth and our communities.

To this end, the La Via Campesina will keep fighting. We will organise, resist and conduct solidarity events across the world with the participation of our members and the support of allies, demanding that national governments reject WTO and take agriculture out of its scope.

La Via Campesina is calling upon social movements and civil society organisations of the world to mobilise and organise our resistances against the World Trade Organisation (WTO) and Free Trade Agreements (FTAs) https://t.co/GaAAUTjaT3 #WTOKills #FoodSovereigntyNOW pic.twitter.com/UUjTP5sSsb