Indian farmers attending the World Trade Organization’s 11thMinisterial Conference from 10 to 13 December in Buenos Aires are demanding the Indian government and its delegation led by Commerce and Industry Minister, Suresh Prabhu, to defend India’s food security and the livelihoods of millions of poor consumers and farmers. They warn Prabhu to not give in to rich country demands of ending India’s public food stockholding program and farmer subsidies which they deem as trade distorting.

India’s National Food Security Program currently covers up to 75% of the rural population and 50% of the urban population [1] and provides targeted subsidies to the poorest Indian’s especially women and children. At the same time, in order to maintain adequate food stocks for the program, the government supports Indian farmers by procuring certain grains from them at fixed and subsidized prices called Minimum Support Prices (MSP)[2].

While the MSP is quite low and doesn’t even cover the cost of production by farmers, developed countries still demand even these low and life-supporting subsidies to be removed. On the other hand farmers in developed countries continue to receive enormous subsidies. In India, the move towards dismantling the food security program has already begun, subsidized ration shops in some Union Territories have been closed [3].

At the WTO’s Bali ministerial in 2013 countries had decided on a peace clause until a permanent solution was found, whereby action would not be taken against countries breaching subsidy limits for their public stockholding programs[4]. Now rich countries are imposing all kinds of conditions upon the permanent solution which would make it difficult for developing counties to fulfil and maintain their food distribution programs [5]. 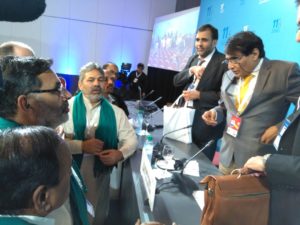 Yudhvir Singh of the Indian Coordination Committee of Farmers’ Movements (ICCFM) and representing farmers from across India said, “India must not entertain any new issues like e-commerce or conditions or compromises on any allied issues until the permanent solution is resolved.” Rakesh Tikait of BKU said, “Indian farmers are committing suicide because of poor incomes, now they want to cut even this very low support that is keeping us farmers and the hungry from dying.”

S Kannaiyan, convener of the South Indian Coordination Committee of Farmers’ Movements(SICCFM) said, “Rich countries wrote the Agreement on Agriculture in the WTO to favour themselves. Agribusiness corporations in rich countries receive huge subsidies which distort international prices. They want to dump their agriculture products in our countries and want us farmers to go out of business and depend on them for food. Agriculture must be taken out of the WTO.”

Another farmer from the Karnataka Rajya Raitha Sangha(KRRS), Gopal Papegowda said, “The Government should expand our Public Distribution Program to include pulses, oilseeds, millets, and vegetables which will benefit our farmers and poor consumers instead of dismantling it.” 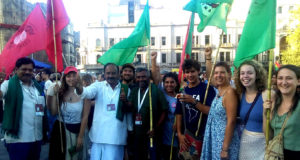 Sellamuthu, of the Tamizagha Vyavasayagal Sangham(TVS) said “We have travelled far to fight for our basic right to an honest dignified livelihood. The Indian government cannot let us down this time. Giving in to the demands of the corporate controlled WTO will mean the sure death of the Indian farming community which is already reeling under severe agrarian distress.”

The farmers represent some of the largest farmers’ networks in India have been accredited to attend the WTO Ministerial Conference as Civil Society representatives of the international peasants’ movement, La Via Campesina [6].

[3] http://www.downtoearth.org.in/news/why-india-needs-to-fight-for-food-security-at-wto-59310: “According to the information provided by the Ministry of Consumer Affairs, Food and Public Distribution in Lok Sabha (Lower House of the Parliament of India) on July 25, 2017, all the ration shops in Chandigarh and Puducherry have been closed. These two union territories were used to be allocated 91,584 tonnes of food grains for distribution among 857,000 consumers. This has been stopped from the year 2017-18 and replaced by direct cash transfers,” instead of procuring from Indian farmers.

[4] http://www.thehindubusinessline.com/economy/at-wto-india-to-play-hardball-on-peace-clause/article9968851.ece: “According to the peace clause negotiated by India at the Bali meet in December 2013, no action will be taken against India, or other developing countries, in case the subsidies on their food procurement programmes breach the ceiling of 10 per cent of value of food production laid down by the Agreement on Agriculture”

[6] La Via Campesina is an international movement bringing together millions of peasants, small and medium size farmers, landless people, rural women and youth, indigenous people, migrants and agricultural workers from around the world. La Via Campesina comprises 164 local and national organisations in 73 countries from Africa, Asia, Europe and the Americas. Altogether it represents about 200 million farmers. (https://viacampesina.org/en/)