Home » “Take agriculture out of the WTO”, Farmer Lee Kyung Hae | Reproducing his letter from 2003 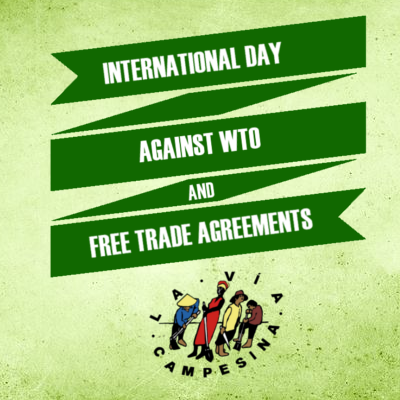 On the 10th of September 2003, while protesting outside the WTO ministerial in Cancun, Mexico, farmer Lee sacrificed his life by stabbing himself. That tragic incident exposed  the destructive effects of WTO and its trade liberalisation efforts on the lives of millions of peasants globally.  In memory of Lee and the continuing struggles of peasants in resisting the neo-liberal agenda of WTO, La Via Campesina marks September 10 as the International Day Against WTO and Free Trade Agreements.

It is a more fitting tribute to let Lee tell his own story, from a statement he distributed in Geneva and later minutes before his death in Cancun:

I am 56 years old, a farmer from South Korea who has strived to solve our problems with the great hope in the ways to organize farmers’ unions. But I have mostly failed, as many other farm leaders elsewhere have failed.

Soon after the Uruguay Round Agreement was sealed, we Korean farmers realized that our destinies are no longer in our own hands. We cannot seem to do anything to stop the waves that have destroyed our communities where we have been settled for hundreds of years. To make myself brave, I have tried to find the real reason and the force behind those waves. And I reached the conclusion, here in front of the gates of the WTO. I am crying out my words to you, that have for so long boiled in my body:

I ask: for whom do you negotiate now? For the people, or for yourselves?

Stop basing your WTO negotiations on flawed logic and mere diplomatic gestures.
Take agriculture out of the WTO system.
Since (massive importing) we small farmers have never been paid over our production costs. What would be your emotional reaction if your salary dropped to a half without understanding the reasons?

Farmers who gave up early have gone to urban slums. Others who have tried to escape from the vicious cycle have met bankruptcy due to accumulated debts. For me, I couldn’t do anything but just look around at the vacant houses, old and eroding. Once I went to a house where a farmer abandoned his life by drinking a toxic chemical because of his uncontrollable debts. I could do nothing but listen to the howling of his wife. If you were me, how would you feel?

Widely paved roads lead to large apartments, buildings, and factories in Korea. Those lands paved now were mostly rice paddies built by generations over thousands of years. They provided the daily food and materials in the past. Now the ecological and hydrological functions of paddies are even more crucial. Who will protect our rural vitality, community traditions, amenities, and environment?

I believe that farmers’ situation in many other developing countries is similar. We have in common the problem of dumping, import surges, lack of government budgets, and too many people. Tariff protection would be the practical solution.

I have been so worried watching TV and hearing the news that starvation is prevalent in many Less Developed Countries, although the international price of grain is so cheap. Earning money through trade should not be their means of securing food. They need access to land and water. Charity? No! Let them work again!

My warning goes out to all citizens that human beings are in an endangered situation. That uncontrolled multinational corporations and a small number of big WTO Members are leading an undesirable globalization that is inhumane, environmentally degrading, farmer-killing, and undemocratic. It should be stopped immediately. Otherwise the false logic of neoliberalism will wipe out the diversity of global agriculture and be disastrous to all human beings.

This post is an edited version of an article that appeared in Countercurrents.org in 2003. Read the original article here.