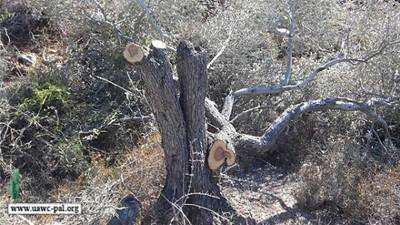 (Palestine, Ramallah, January 2015) More than 5500 trees uprooted in one month! The Union of Agricultural Work Committees (UAWC) follows up intensely the Israeli violations against the Palestinian farmers to expose the brutality of the occupation to the local and international world. West Bank Damages to the agricultural sector & Violence against farmers · On 3 January, a group of 50 armed settlers tried to detain five Palestinian herders next to the settlement of Itamar (Nablus), sparking clashes; Israeli forces who arrived at the site fired live ammunition, rubber bullets and tear gas canisters at the Palestinians, injuring two of them (Weekly_report).

During January/2015 at least 72 Palestinian structures (including animal shelters and residential tents) were demolished in many Palestinian communities (mainly East Jerusalem and Area C) according to the weekly reports of the United Nations Office for Coordination of Humanitarian Affairs (OCHA).

January/2015 recorded at least 80 incidents where the Israeli forces opened fire at the fishermen and farmers approaching or exceeding the Israeli-imposed Access Restricted Areas (ARA) at land and sea, according to the weekly reports of the United Nations Office for Coordination of Humanitarian Affairs (OCHA). Note: the report covers the period between 1-1 and 26-1-2015