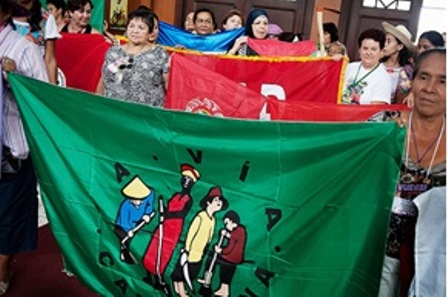 (Zimbabwe, Harare, January 28, 2015) Via Campesina International expresses its solidarity with the Honduran peasant movement following the violent attack on the offices of Via Campesina in Honduras, which took place in the early morning of January 25th. We deplore in the strongest terms the systematic violence which the Honduran peasant movement faces every day, and which has worsened since the coup d’etat that took place in 2009.

This new attempt to deter the peasant movement from its struggles and its conquests took place as follows:

1. On Monday January 25th, 2015, a contingent of men armed with heavy weapons fired more than two dozen shots into the building housing the offices of La Via Campesina in Honduras.

2. At the site of the crime, there are gunshot holes in the walls and doors and empty bullet shells.  La Vía Campesina Honduras reports that similar incidents took place during the period of the coup d’etat in 2009; as of this time, no one has been found responsible for those incidents.

3. The roots causes of these incidents can be found in the context of La Via Campesina’s demands for comprehensive Land Reform with gender equity, for Food Sovereignty, and Rural Development, demands that directly affect the interests of large landowners and politicians.

Furthermore, La Via Campesina Honduras has openly expressed its opposition to the reform to the Honduran constitution which will guarantee the existence of the Military Police, a body that has been publicly linked to cases of Human Rights violations.

In the light of the foregoing, La Via Campesina Honduras:

A) Demands that the Public Prosecutor’s office conduct a thorough investigation leading to the arrest and punishment of the perpetrators of these acts.

B) Holds the government of the Republic of Honduras responsible for the shooting attack and for the damage to its offices, as well as for any future physical attacks that threaten the lives of employees, peasant leaders, and coordinators of La Via Campesina.

E) Demands that physical protection be accorded to Rafael Alegria, peasant leader and key advocate of land reform in Honduras, as well as to his family and to other endangered men and women peasant leaders.

La Via Campesina International calls upon its member organisations, friends and allies to continue to strengthen solidarity in the world-wide peasant movement. In opposition to all forms of persecution and violence, we resolve to reinforce the struggle of the Honduran people – and the struggles of women and men peasants all over the world – for land, seeds, and Food Sovereignty.