Respect the rights of farmers to struggle against the food and climate crises! 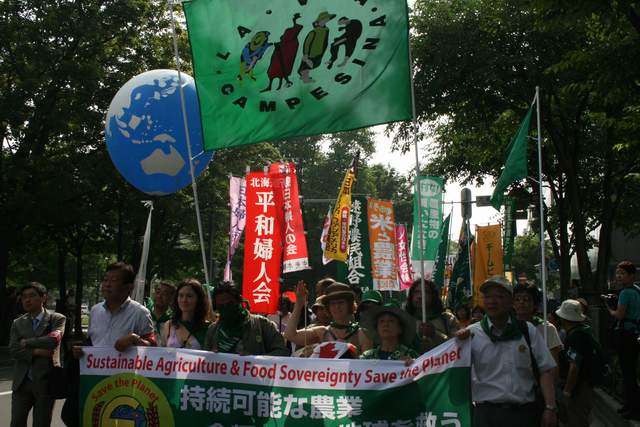 Currently more and more people are suffering from hunger due the high food prices on the world market. Meanwhile, global warming is causing more droughts, floods, and other disasters due to decades of unsustainable energy use and the growth of energy-intensive industrial agriculture. Both are caused by policies that value trade and business more than the environment and peoples’ livelihoods.

The governments of the eight richest countries of the world and the large corporations who help  design their policies have caused this crisis. Trade liberalisation of food products have made countries dependant on world markets. Meanwhile, industrial development, overconsumption and industrial agriculture have contributed to global warming. Unregulated speculation by investors and commodity trading companies are driving up food prices and leading to increased hunger and poverty.

This is why the international farmers movement La Via Campesina and its Japanese member organisation Nouminren (Japan Family Farmers Movement) are organising activities during the G8 Hokkaido To-yako Summit in order to promote alternatives to solve the current crises.

Small farmers from around the world maintain that sustainable family farming and local food production can dramatically protect people from the food crisis and the volatility of world prices. At the same time, organic agriculture is one of the best way to capture carbon and address the climate crisis.

A delegation of 19 Korean Via Campesina farmers who are members of the Korean Woman Peasants’ Association and the Korean Peasants’ League have been detained at the Sapporo airport for more than 24 hours. They arrived on July the 3d at about 1pm and are still detained and interrogated by the immigration police. They were travelling with the official invitation letter from Nouminren with the full programme of activities as requested by the Japanese authorities.

Korean farmers have been suffering from the forced opening of their market to US beef imports despite concerns about the contamination of US beef with mad cow disease.

La Via Campesina, Nouminren and Shokkenren (National Coalition of Workers, Farmers and Consumers for Safe Food and Health in Japan) denounce the unfair detention and treatment of small farmers who were simply joining an international event on food sovereignty and global warming. Other farmer leaders, men and women from Thailand, Indonesia, Bangladesh, Spain and Canada have joined today hundreds of Japanese farmers at a Forum on Food Sovereignty held in Hokkaido.

As peasants and small farmers, we are victims of the crises created by neoliberal policies. Rural people are among the first ones to suffer from climate changes. We also suffer from the food crisis as most small producers also have to buy food to survive. We are not the ones benefitting from the high food prices as the price at the farmgate is much lower than the price paid by consumers.

Large retailers, food traders and agri-business companies are the ones profiting from the current situation.

Farmers not only suffer from the current global crisis, but they are also criminalised when they tend to develop collective alternatives.

La Via Campesina is a network of small producers who are peacefully struggling to feed our communities. We believe that if governments listen to our voices and support family farming, we can develop more peaceful, sustainable and fair societies.

We are the victims of the unfair policies of globalisation that favour agribusiness and of unjustified repression and criminalisation. We demand that our right to meet, demonstrate and propose solutions to the problems facing humanity and the environment.

We demand that all the farmers, workers and other activists detained at the Sapporo Airport be allowed to join the civil society activities paralel to the G8 Summit.

We defend solidarity among farmers, workers, consumers and the people of Hokkaido in the defense of a better planet.