The international farmers’ movement La Via Campesina invites the media to speak with representative of peasant farmers organizations, women and men, from around the world during the G8 summit on the global food and climate crisis. More than 600 farmers from Nouminren, the Japan’s Family Farmer’s Movement member of La Via Campesina, and about 100 farmers from around the world will gather in Hokkaido for this event. 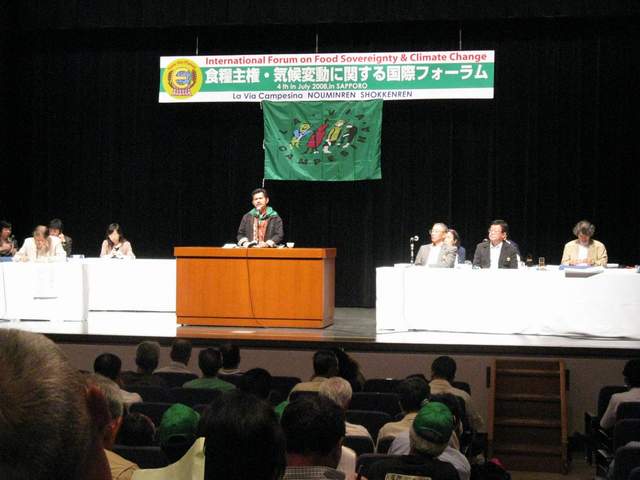 La Via Campesina will hold a press conference on July 7, 10 am – 11 am, at the NGO media centre (Sapporo city)

The media is also welcome to take part in events co-organised by Via Campesina, Nouminren and Shokken-Ren(1) from July 4-9 (see programme below).

The representatives of the 8 richest countries of the world will meet in Hokkaido to discuss issues such as the food and the climate crisis. Yet these governments have imposed policies that are the root cause of the crisis in food and agriculture. By supporting large agribusiness at the expense of small farmers, they have effectively forced millions of small farmers off their land and into urban poverty while doing nothing to alleviate world hunger. The climate crisis, caused by the extensive use of fossil energy in industrialized countries and the massive deforestation by TNCs, will especially hurt small farmers and rural populations.

The reaction of the WTO, World bank, as well as the G8 governments to the food crisis has been disastrous: they call for more of the same polices that are at the root of the current crisis: more liberalisation, more free trade, more support for fertilizers and industrial seeds, a green revolution in Africa, more food aid, and a rapid expansion of agro-fuels. Mainly due to the attitude of the G8 countries, no advance at all was made at the High level Conference organized by the FAO, and the TNCs were not prevented from pushing through their disastrous initiatives on agro-fuels.

The answer to the climate and food price crisis is food production based on small producers using sustainable and local resources producing for domestic consumption.

Information for the media

(1) Nouminren: Japan Family Farmers Movement, member of La Via Campesina
Shokken-Ren: National Coalition of workers, farmers and consumers for safe food and health. (Nouminren is part of this coalition).