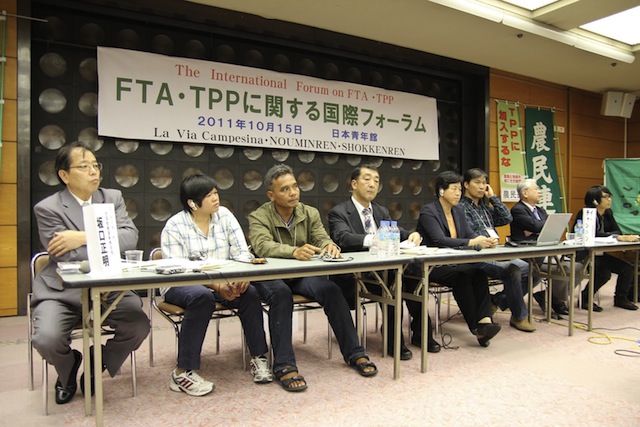 We, representatives of peasants, workers, consumers, urban and rural poor, social movements and civil society organizations are gathering in Chiba and Tokyo, Japan from 12 to 15 October 2011. La Via Campesina South East and East Asia region with FTA Watch (Thailand), Shokkenren (Japan) and Task Force against Korea-US FTA (Republic of Korea) organize a strategic meeting to discuss Free Trade Agreements (FTAs) and Trans-Pacific Partnership (TPP). This is to express our alarm on the implementation and pursuing of the agreements across Asia. Currently there are dozens of FTAs between countries and/or regions and they have been threatening peoples’ livelihood in the region.

At present, the world is still experiencing food, energy, financial and environmental crises. Corporations and capitals who cause these crises are trying to fill their already-full pocket by pushing FTAs and TPP. Only 1 percent of the world’s population are practicing and reaping benefits from free trade. This attempt will exacerbate the current crises and sacrifice the people, especially the poor.

The FTAs are more liberal than the World Trade Organization (WTO) talks. FTAs are also used as a way to accelerate the free-trade after the collapsing WTO since 2003. The TPP will liberalize goods, industry, services and investment in the greater Pacific Rim. TPP is mainly an initiative by the United States and through this, they want an area covering ambitious liberalization for almost 54 percent of world’s economy.

National budget for public spending will be annihilated because of liberalization. In FTAs and TPP, peoples’ access to essential public services like healthcare, education, electricity and water will become more difficult. On the other side, access to food, jobs and productive natural resources for the people in the region will also be diminished because of exploitation by corporations and big capitals.

Further liberalization will violate peoples’ and national sovereignty. We are very concerned because we have witness the previous FTAs that destroy peoples’ food sovereignty, especially local price and markets. FTAs will continue to undermine our national sovereignty (especially the developing and poor nations) as they will secure transnational corporations (TNCs) domination. Moreover, FTAs and TPP will perpetuate neocolonialization because poor and developing countries will keep supplying energy and raw materials to developed countries.

Workers’ rights are also in danger. FTAs and TPP will create flexible labor market and this will alleviate workers’ protections. Very low wages, temporary to no contract at all, outsourcing practices, no insurance or other protections are very dangerous situations happened to many workers in our region.

Meanwhile, there are many alternatives in local, national and even regional in terms of trade. We do not oppose trade, but we want trade that is based in justice and fair rules—which ensures no exploitation from one human to others. Therefore, we need trade that respects human rights, upholds food sovereignty and ensures peoples’ access to essential public services.

In this strategic meeting we pledge our commitmet to build Another Asia, in which we can practice cooperations among nations and its people—and continue working towards system change containing genuine and meaningful sustainable development, alternative financial system, trade based on solidarity and complementary, climate justice, food sovereignty and energy sovereignty.

In light of threats from FTAs and TPP, we therefore call on our governments to completely reject the attempts to conclude the upcoming agreements and to stop the implentation of the previous FTAs. There is a need to analyze thoroughly the content of agreements before the government sign. We need participation, involvement and inclusion of the people, such as peasants, workers, fisher folk, small-and-medium enterprises and consumers to decide such important matters.

Therefore we will continue our works and solidarity within this issue, and to:

Organize common actions to voice our concerns in the upcoming ASEAN Summit in Bali, Indonesia and also responding to APEC Summit in Honolulu, US—both on November 2011.

Create permanent stategic committee to coordinate actions on FTAs and TPP. Continuing the research for alternatives to regional cooperation and work together to create common platform among organizations in the region.

We know that this will be a long process to derail the FTAs and TPP, especially in the region. Through hard work, strengthening solidarity through our activities and actions, we are determined that we will achieve the goal. We also call to peoples’ movements and civil society organizations to come and join us in this very important struggle.