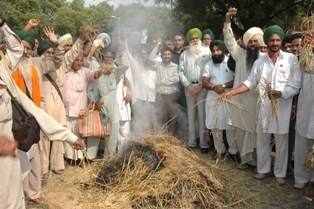 New Delhi: Mr. Barak Obama is in New Delhi today, to seek greater market access for the American agricultural goods in India. What the US couldn’t achieve through the Doha Round of WTO negotiations, Mr. Obama would try to get that through a bilateral deal with India. Today, the Bhartiya Kissan Unions staged a massive demonstration at the Parliament Street in Delhi protesting against Obama’s visit to India and his agenda to sign bilateral agricultural and trade deals to facilitate takeover of Indian agriculture by the US multinationals.

The United States is pushing India for removing all barriers in the way of US exports to India and we are quite sure that Mr. Obama’s would secure this today, without making any commitment towards reduction in US farm subsidies, especially in cotton, which India has been demanding during the 9 years of Doha negotiations. The increased market access to agricultural goods of the United States would be disastrous for the Indian farmers who had suffered a lot in the last 15 years of WTO regime due to the dumping of subsidized cotton from US which resulted in sharp fall in cotton prices and increased farmers suicide in the cotton belt of India

We, the farmers of India, mainly from Bhartiya Kissan Unions, are also quite agitated and upset with the furthering of Indo-US cooperation in agriculture. Since 2006, when Mr. Bush signed the Indo-US Knowledge Initiative on Agriculture, we have witnessed a greater penetration of US agribusiness companies in our policy making on agriculture as well as in our agricultural research institutions, such IARI, ICAR and agricultural universities. This also resulted in different policy initiatives in agriculture, like the new Seeds Bill, the National Biotechnology Regulatory Authority bill 2009, Protection and Utilisation of Public Funded Intellectual Property Bill, 2008 to benefit US agribusiness mainly Monsanto, DuPont, Cargill and others. Moreover, the US retail giant, Wal-Mart, has been publicly lobbying for opening up India’s retail sector to FDI and in this visit the thrust of Obama’s engagement would be on opening up of the food retail, which would result in complete takeover of Indian small retail. We, therefore, fear that any kind of the Indo-US agricultural treaty, focusing on agricultural research, biotechnology, retail, would bring Indian agriculture under the direct control of US Corporate houses.

We therefore demand that the Government of India must not sign any kind of agreement on agriculture with the US Administration which would result in opening up of agriculture research, agricultural trade, retail sector, and other services for American capital and MNCs. We don’t want any bilateral agreement on agriculture with the US on the line of Indo US Knowledge Initiative of Agriculture, whether in the field of trade, biotechnology or irrigation. We appeal to the Prime Minister and the UPA Chairperson that they do not allow any market access in agricultural trade to United States, which the latter has been aspiring to gain through failed Doha negotiations, through a bilateral Indo US trade deal. We also demand that all the Memorandum of Understanding (MoUs) signed by the Indian public agricultural institutes and universities with the multinational corporations, biotech companies and agribusiness must be scrapped. Through these MoUs, the big corporations are taking over the research, knowledge and resources of our public agricultural institutions for their profit.

We also demand that the UPA government must review the gains from the Free Trade Agreement it has signed with ASEAN, South Korea and others before entering into any FTA negotiations. We fear that the 30 odd FTAs which the government of India is negotiating with the highly industrial countries including the US, the EU, Israel, Australia and others would provide market access to their agribusiness and their heavily subsidized agricultural commodities. This is highly detrimental to India’s rural food producers and production. We demand that agriculture and agricultural related activities must be kept out of any FTA negotiations India is engaging with.

– Must implement Swaminathan Committee recommendations for MSP which should be at least 50% more than the weighted average cost of production.

– Must increase the MSP for Sugarcane crop to Rs.300 per quintal.

– Immediately expedite the procurement of rice crop in Punjab and Haryana.

We also demand that the state and the Centre governments must stop all land acquisition in the name of ‘public purpose’. There must not be any forceful acquisition of farmers land and selling of the land by the government, acquired on the pretext of “public purpose”, to Corporates for any development projects or SEZ. The government must stop to act like a ‘middle man’ in acquiring farmers land for Corporates. The government must soon amend the Land Acquisition Act of 1894 in consultation with farmers and the definition of “public purpose” in the Act should be clearly defined and specified. In case land is needed for public purposes like hospital building, defence purposes; market rates should be paid to the farmers.

The farmers of India have suffered a lot under the neo-liberal regime of the Manmohan Singh government which is determined to facilitate takeover of Indian agricultural by the multinational corporations at the cost of small and marginal farmers. Therefore, the Coordination Committee of BKU farmer Unions have declared today that if their demands for a Framers’ friendly Agricultural Policy; Increased MSP for agricultural commodities; Halting of all FTAs; and Withdrawal of all MoUs with agricultural corporations, are not met within four months, they would mobilize for a massive protests and blocking of all roads to Delhi on 9th March 2011.