Home » Events » April 17 : Philippines (Quezon) lighting of torches outside of the Office of the Department of Agrarian Reform

April 17 : Philippines (Quezon) lighting of torches outside of the Office of the Department of Agrarian Reform 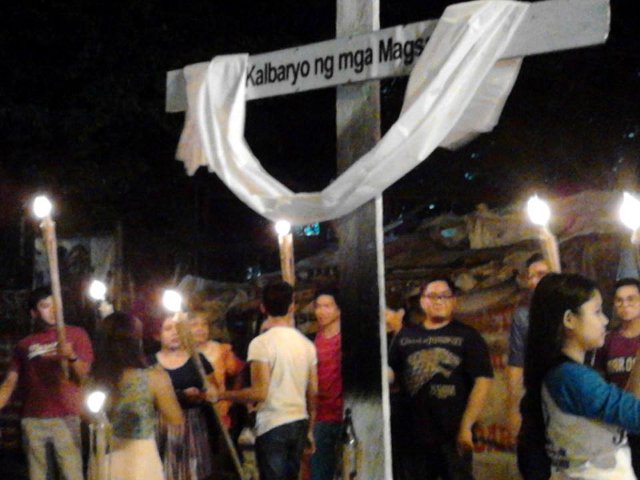 (April 17, Quezon) Here are some pictures during the lighting of torches in the 3 crosses erected near the farmers’ camp outside of the Office of the Department of Agrarian Reform in Quezon City, Philippines to celebrate the International Day of Farmers’ Struggles in defense of Peasants’ and Farmers’ Seeds.

With us during the occasion were student leaders from the University of the Philippines (UP). The officers of the UP Student Council and representatives from the Focus on the Global South. All of them are in support of the struggles of the three (3) farmer organizations, members of PARAGOS-PILIPINAS, to own the land they till and occupy. Members of La Via Campesina, Regional Southeast Asia visited the camp last October 2013 in solidarity with the farmers’ struggles. The camp- out of the farmers started last October, 2012 and it is almost one year and six months now that have been camping out to press their demands to have their lands covered under the agrarian reform program of the government and they VOW not to SURRENDER until their demands are fulfilled.