Home » Both sides of the Pacific- Via Campesina members oppose TPP 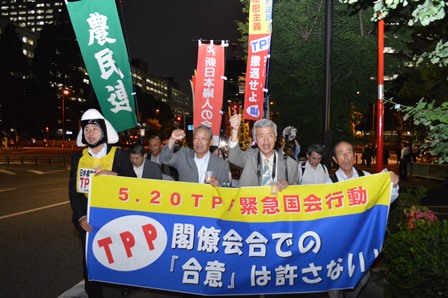 On both sides of the Pacific, peasants, family farmers, and rural workers reject the extension of neoliberal policies

(June 15, 2015): We, members of La Via Campesina on both sides of the Pacific, jointly express our opposition to the TPP. This so-called partnership is in fact an extension of the neoliberal policies that are being promoted by transnational corporations (TNCs) with the support of the governments at their service.

Neoliberal policies and trade agreements have already caused catastrophic damage to peasants and family farmers and to agricultural workers, who are more and more at the mercy of the transnational corporations. The increasing control of global commodity markets exercised by these corporations constitutes a threat to the livelihoods of peasants, family farmers and rural workers, to the well-being of indigenous communities, and to the health of consumers. Their power is an affront to food sovereignty and social justice, and a threat to ecological integrity. As more than twenty years of experience with neoliberal trade agreements has shown, increases in agricultural exports serve only to increase the profits of transnational corporations; they do not raise the net incomes of peasants and farmers.

Furthermore, the TPP is not simply an agreement about trade. Its provisions infringe upon the national sovereignty of the countries concerned, subjecting their citizens to rules that are dictated by the transnational corporations and leading to a deterioration in living conditions for the great majority – especially for family farmers, workers, and small business owners. By strengthening the intellectual property rights of pharmaceutical companies, the agreement will deprive poor people of prescription drugs. The Investor-State Dispute Settlement (ISDS) provision enabling corporations to sue national governments for alleged loss of profits will lead to the modification, or even the abandonment, of health, environmental, and social programmes. The provisions regarding competition, state-owned enterprises, and government procurement will prevent member countries from implementing economic policies that are suited to their particular situation.

Rising opposition on the part of the public, who are becoming more aware of the dangerous nature of the TPP’s provisions, has so far prevented the negotiators from reaching an agreement. Now is the time for the negotiations to be stopped. In Japan, in Korea, in Canada, and all over the world, what we urgently need is to bring the policies and practice of neoliberalism to an end, and to build an alternative international trading system that has as its foundation food sovereignty, the protection of the environment, and the well-being of our peoples.