Home » In memory of Lee, the struggle against the WTO continues 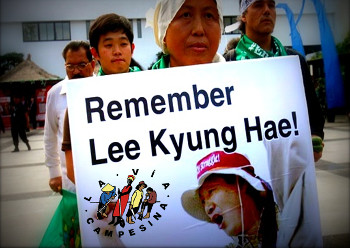 (Harare, 10 September 2015) Today, as la Via Campesina, we celebrate International Day of Peasant Struggle Against the WTO, and remember the life and legacy of our brother and leader Mr. Lee Kyun Hae. A Korean farmer leader whose right to life with dignity was destroyed by the WTO, Mr. Lee sacrificed himself in 2003 to radically denounce those responsible for the disappearance of peasant economies around the globe. Now, in 2015, the World Trade Organization (WTO) is at it again. Promising to force through “all aspects of the Bali Package”, the multilateral killer of farmers will convene its 10th Ministerial Conference in Nairobi, Kenya from 15 to 18 December, 2015. Further liberalization of trade is not only on the agenda, it is the agenda, with corporate agribusiness looking to destroy the few public policies that still protect some national food systems.

Referred to simply as the “Bali Package”, the outcomes of the last WTO Ministerial (2013) were hailed as a victory by the WTO for unlocking a series of deadlocked negotiations on trade, agriculture, and development. La Via Campesina warns, however, that this so-called “victory” for the WTO and the Transnational Corporations (TNCs) that back it came at the expense of the world’s poor majorities. As peasants, men and women, around the world organize to achieve Food Sovereignty – in which national governments must support and defend rural communities, cultures, and livelihoods – powerful voices inside the WTO are looking to end the so-called “peace clause” which “allows” national governments to protect their food and agricultural systems.

La Via Campesina continues to firmly believe that the WTO is an organization for the “developed” countries and the TNCs, pushing free trade rules that only benefit the rich and concentrate even more wealth in the hands of a few. La Via Campesina reiterates its position that the WTO is a failed and delegitimized institution that is desperately trying to revive itself with its “Bali Package” at the high cost of food sovereignty, livelihoods, jobs, and the future of the people and the planet. In short, La Via Campesina reiterates our call for an End to the WTO and the tyranny of the free trade regime. We redouble our efforts in fighting the corporate-led system and pushing for peoples’ alternatives.

In December, La Via Campesina will be mobilized in decentralized global aimed at pressuring national governments away from the free trade agenda. We will also be on the streets of Kenya supporting our brothers and sisters from across Africa, and around the globe, who will be demonstrating against the WTO in Nairobi. We invite all those in struggle against the WTO to email your plans for action to [nomorewto.kenya.lvc@gmail.com] and help make the 10th WTO Ministerial Conference its last.