Home » Japanese Government should Issues an Official Apology to the Victims of Military Sex Slavery. 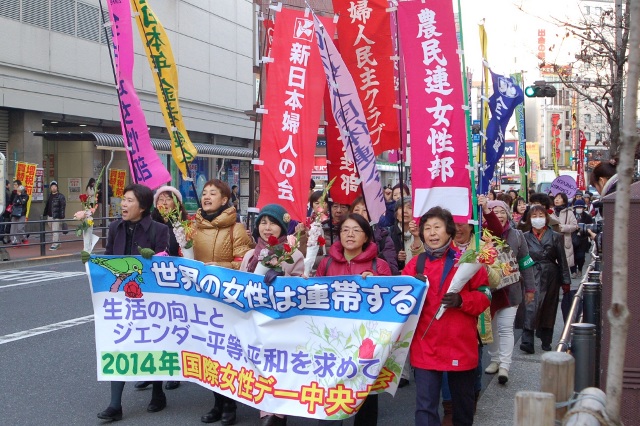 (Tokyo, March 8th 2014) During the Asia-Pacific War, which took place from the early 1930s to the end of World War II, the Japanese forcefully mobilized women to the battlefield for sex slavery purposes from many Asia-Pacific countries such as China, North and South Korea, Taiwan, Japan, Indonesia, Timor Leste, Myanmar, the Philippines, Malaysia, Brunei, Guam, and so on, and thus violated their human rights.

After the war, these women were either slaughtered or abandoned in the battlefield and left to die. Even if they did manage to make it home, they have not been provided with reparations because the Japanese government has concealed and distorted its own war crimes. The survivors from these battlefields were forced to live silently and endure their suffering for more than 60 years.

After the feminism movement and after accusations began to be made by the victims themselves with a view to resolving this problem in Korea in the early 1990s, calls were made throughout the international community, including UN, ILO, and international human right groups across Asia, for the Japanese government to admit their guilt. It was called on to acknowledge these war crimes and take immediate actions such as issuing an official state apology and providing legal reparations for the survivors. This movement has now expanded to enact a memorial day for the victims in order to remember the painful history of war and humankind.

However, the current Abe government has visited the Yasukuni shrine, which along with the war dead honors some Class A war criminals from World War II, and has never admitted to the existence of sex slavery, stating that sex slavery is voluntary prostitution. The Japanese government thus infringes the honor and human rights of the victims. They have even demonstrated their dirty desire to go back to Militarism now without hesitation.

As we are Asian peasants who protect nature, life and human rights by farming, La Via Campesina stands against all kinds of violence toward women and war, for this to never happen again, we call upon the Japanese government to do the following:

1. The Japanese government should admit to these acts and issue an official state apology concerning the fact that they forcefully mobilized many Asian women to battlefields where soldiers were stationed for sex slavery during World War II.

2. The Japanese government should open up all files and materials related to the sex slavery issue and stop the distortion of history and a revival Militarism movement.

3. The Japanese government should reflect upon Japan’s past invasion history and keep Article 9 of its constitution.