Home » UNCTAD 14: Elites speaking in the name of peasants and the global poor won’t solve anything! 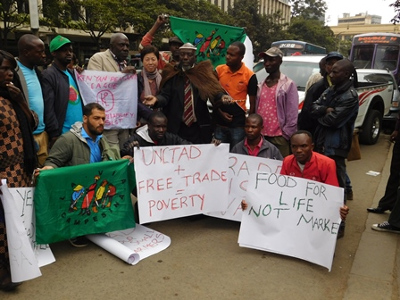 Statement from La Via Campesina and Kenyan Social Movements

Today the UNCTAD 14th session ends in Nairobi, Kenya, and the discussions about its agenda over the next four years are finalised. The session started on the 17th and sought action to move towards an inclusive and equitable global economic environment for trade and development. This meeting was attended by the government ministries responsible for trade, development and commerce and many other delegates from the business and civil society organisations.

Since 1964, when UNCTAD came into being with a noble mandate, poverty and hunger has not been eradicated but has increased significantly, and the inequalities have worsened. The rich are richer, the poor poorer. UNCTAD14 cannot solve the challenges of the poor, the smallholder farmers and peasants because it does not understand them. At the Kenyatta International Convention Centre, what we see are the elites speaking in the name of peasants and the Global poor. The ministers of trade, development and commerce and business people cannot solve the problem of the poor because they don’t know nor understand them. Unless we see the problem of the poor from the eyes of the poor, we will never solve the problem of poverty, hunger and inequality in this world.

African and other developing countries’ governments use our tax money to create conditions that allow big corporations to exploit the peasants and poor, following a neoliberal free trade paradigm which only serve the interests of  developed countries’ and transnational corporations. Illegitimate public debts are increasing, a scheme used to loot public resources of most developing countries. Again, the only development we see in our communities is not inclusive. Our position is that there should be a new economic model which is inclusive, socially just and where the poor people and the masses are involved in the process.

Most deals are done in secret and the people don’t know about their existence and contents. We call for declassification and democratisation of information on trade and investment deals and treaties by our governments. There should be popular education so that people can learn about the dynamics and dangers of the international trade system.

We acknowledge and support decision of the government of Tanzania to pull out from the European Union Economic Partnership Agreement (EPA) for the East Africa community. We implore other African governments to do the same for the benefit of the peasants, poor and our society as a whole.

Our governments have an obligation to provide social services and up hold the Article 25 of the Universal Declaration of Human Rights. Specifically article 43 of the Constitution of Kenya obligates the Kenyan Government to ensure that every Kenyan is free from hunger, and to have adequate food of acceptable quality and that the State shall provide appropriate social security to persons who are unable to support themselves and their dependants.

Food is a Human Right. We know that most food is exchanged in the informal sector. To privatise the food system under guise that the private sector is more efficient and effective is not a solution to improving or having access to food. We are demanding a change in paradigm that takes the food out of trade, and sets us in the path of food sovereignty.

UNCTAD, open your eyes to the smallholder farmers and the poor!

Privatization of Social Services Is Not Development

UNCTAD and Free Trade is Poverty