JAKARTA: Last Sunday (July 29), the land of West Nusa Tenggara (NTB) was rocked by an earthquake measuring 6.4 magnitude, causing severe damage and casualties. Several farmers, who are also members of the Indonesian Farmers’ Union (SPI) in North Lombok are among the people affected.

“One person died and several wounded. Twenty houses of farmers has collapsed completely. Several other houses suffered damage and cracks and a mosque also collapsed.”explained Zakaria (29/07). To sleep, the farmers are currently setting up tents, making public kitchens, and in desperate need of solidarity in the form of basic necessities and medicines. 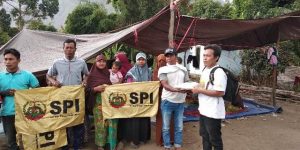 To the brothers and sisters in West Nusa Tenggara, SPI farmers from various regions of the archipelago extended solidarity and help. General Chairman of SPI Henry Saragih called out all members of the union as well their neighbours to reach out to the affected families and ease out their hardships.

On Saturday (04 August), some relief was distributed to the affected victims by members of the union.

“Farmers here thank the brothers and sisters who have given their solidarity,” Zakaria said.