Throughout the history of farming, peasants and villagers have obtained energy from their farmland to fulfil their daily needs. Peasant families are used to using the oil extracted from the coconut (copra) to light lamps in their houses. Even now peasant families still use biomass to make firewood for cooking meals. They collect the branches that fall from trees and dry bushes during their day working on their farmland. The technology of using biogas that is processed from animal waste is also very common in peasant communities. Other sources of kinetic energy from rivers such as small micro hydro electric generators are also very common in rural areas. These are some examples on how peasants explore natural alternatives, extracting and generating energy from their farmland. 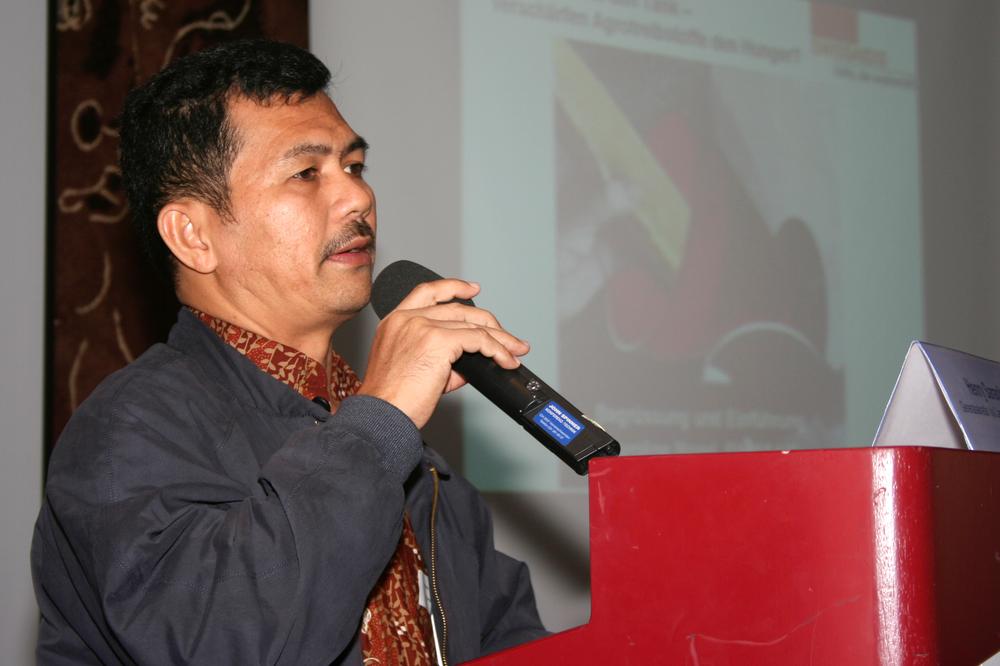 For some centuries we did not have any problems because of the existence of these models of getting energy from farmland. This is renewable energy because peasants could always get it almost like they could harvest fruits from the trees. Peasants needed this kind energy and they were able to produce it in integration with other farming activities in the farmland.

Agrofuels have become an increasingly important issue in these recent years. The issue become very significant because big oil companies need another resources of fuel to complement crude oil based fuels. This idea did not originate with peasants. Before we further discuss agrofuels it is important to expand a little bit about food sovereignty so we can start the analysis from what has been happening with peasant based agriculture.

Via Campesina does not follow the concept and policy of food security that is promoted by FAO because it does not fit in with the realities of peasant farming. Even more La Via Campesina see it as potentially creating big problems for the people of the world, and first and foremost for peasants and small farmers.

Via Campesina reject the policy and the concept of food security that only guarantee that every mouth is fed. It does not address some basic principles of the food system like: who should produce food, how food is being produced and distributed, who should benefit from the food system and how to secure sustainable relationship between the peasant and the consumer. In short, food security just wants to accommodate the interests of agribusiness corporations and trans-national agribusiness corporations (TNCs). Peasants do not want the meaning of food and agriculture to be reduced to only a matter of commodities in markets, and to be subject to the free market. By reducing the meaning of food to a commodity, only those who have money will be able to have access to food.

We do not want markets to determine food production and consumption, we want peasants and consumers to be those who decide on and control food because most of the producers and consumers of food in the world are actually peasant families. We do not want a competitive world food system which will destroy the sovereignty of countries mandated to feed their people. Therefore La Via Campesina struggles to take the WTO out of agriculture.

We fight against the neo-liberal food system because instead of making the food system stronger by protecting the peasants who produce food and giving more protection under the right of food, it create the food crisis; soaring food prices and creating hunger everywhere as is happening now.

In Indonesia’s case, there has been a lot of investment on palm oil plantations. In the beginning the objective was to export the palm oil as crude palm oil (CPO) and process it into cooking oil for the national market. Many international agribusiness corporations have started palm oil plantations which have led to many land conflict cases with the peasant movement in Indonesia. This is because these plantations have been started on communal and peasant-owned lands. The plantations are operated on a monoculture model, by doing so contributing to many natural disasters; the extinction of biodiversity, water scarcity during the drought season and severe floods and land slides during the rainy season. Many peasants have had to live as landless peasants and have been forced to work as daily or weekly cheap labour.

While the issue of agrofuel production is escalating around the world, the government of Indonesia is promoting palm oil plantation by inviting further investment. They do not care about the fact that most of the peasants hold an average of jus 0.3 hectares of land. Worse, as the international price of palm oil is increasing, companies are exporting their production and making the price of edible oil in the national market increase dramatically. The government can’t do more than just make new regulations which ask companies to decrease their export volume. This doesn’t help much, because corporations are more interested in their profits. As an impact, food riots have occurred in many places because people were forced to wait for the subsidized program of edible oil. Women and children have had to stand in queues under the sun for extended periods holding their coupons and people have become incensed and begun to riot. It is a more than ironic situation where Indonesia is the second greatest producer of palm oil but people do not benefit from it at all.

The existing agrofuel program makes the food system worse. After the liberalization of food markets forced a win and lose game between competing countries, now peasants compete with cars.

Via Campesina believe in the principle of Genuine Agrarian Reform which would make sure that peasants have enough land through land distribution. Because by only having control over land can peasants guarantee food for their families and local communities. And by implementation of Food Sovereignty, peasants are convinced that they can feed the world.

Speech by Henry Saragih at a Swissaid meeting in Berne, 29 May 2008