Home » Events » Peasants around the world celebrate their struggle’s day 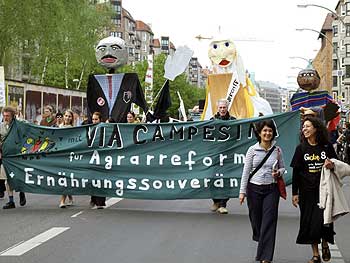 Peasants around the world celebrate their struggle’s day

(Jakarta, April 17 2007) The international peasant’s movement La Via Campesina is celebrating today the International Peasant’s Struggle Day by organising events all around the world. In about 20 countries (*) peasants and small farmers’ organisations and their allies will organise more than 50 events such as conferences, demonstrations, street theatre, film screenings, rural markets and debates on issues as diverse as the impact of industrial agriculture on global warming and the control of supermarkets over the food chain.

This action day commemorates of the Massacre of Carajás, on the 17th of April 1996, where 19 peasants were killed and 69 injured while they were demanding land in order to produce and make a living.

This year, the African organisations will mainly protest against the EPAs (Economic Partnership Agreements) that are threatening their economies by pushing further trade liberalisation. As a result, cheap import of food products will keep destroying local livelihoods. Many African organisations will also join the global day of action against the EPAs on the 19th of April.

In Latin America, Agrarian Reform will be at the heart of the struggle this year. In Brazil for example, actions will be held in 14 states demanding President Lula to implement Genuine Agrarian Reform.

In Europe, peasants’ organisations are launching a call for the anti-G8 protests. Social movements from all over Europe will gather in Rostock, Germany in June to protest against the policies of the G8 governments benefiting transnational business instead of local communities! Meanwhile in Asia, peasants’ organisations will campaign for food sovereignty, farmer’s rights and against large dams destroying rural communities.