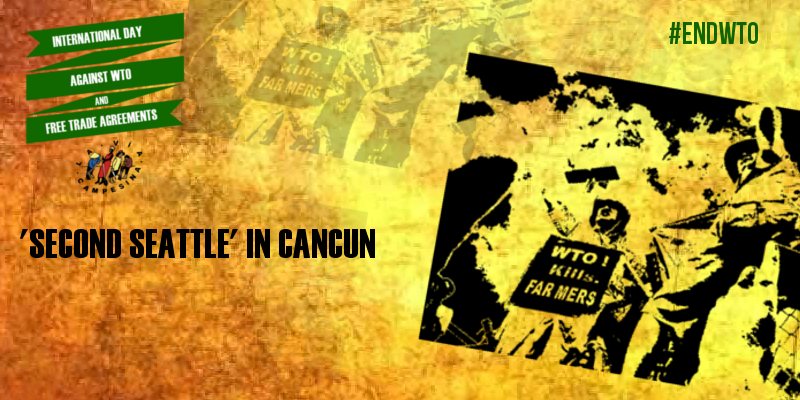 Source: Food First/Our World is not for Sale

September 14, 2003 – 4:30 PM. We just returned from a very moving ceremony for Lee Kyung-hae, the Korean farmer who immolated himself in protest against the WTO last Tuesday. The ceremony was held at Camp Lee, formerly known as Kilometer Zero – the start of the security perimeter, the spot where Lee sacrificed himself, and the place where the Koreans and supporters from around the world have been camping ever since. Today his brother and one of his daughters were present, having just arrived from Korea — his wife died ten years ago in a car accident. Speaker after speaker had the same message: “The sacrifice of Compañero Lee was not in vain, it gave us the energy to derail the WTO talks in Cancun, and his spirit of struggle will live on in our hearts as we keep fighting for that better world that is possible.”

Just a short time later the Via Campesina delegation got calls from inside the convention center announcing the collapse of the official talks. We were told that the Kenyan representative had just stood up during the official press conference at the Convention Center and emphatically declared: “This is over. We have just had a second Seattle,” and walked out, followed in short order by the representatives of South Korea and India.

Earlier that day we had been told by one of the official negotiators that the talks were on the verge of collapse because of agriculture and the so-called “new issues,” and that it was all but over. He told us that the massive protests in the streets and the death of Mr. Lee had been key factors in creating a climate in which Third World countries felt they could once again stand up to pressure from the U.S. and the European Union, just like in Seattle.

In fact yesterday, Saturday, was the most incredible day of protest any of us had ever experienced. From multiple actions by credentialed and non credentialed protestors inside the security zone — the latter after having “infiltrated” into the zone — to the powerfully moving farmer-indigenous people-trade union-youth protest at the fence.

After the violence triggered by paid provocateurs on Tuesday, the death of Mr. Lee, and a general climate of anger and repression, everyone feared the worst sort of confrontation on Saturday, and the police brought in massive reinforcements. They tripled the size of the metal barriers, and the provocateurs showed up in greater numbers, with shopping carts filled with stones and huge metal bars. But the diverse sectors of legitimate protestors came together in an amazing plan that produced the most beautiful, moving and symbolic protest imaginable, so powerful that we were all sure we had reached and passed the turning point viz-a-viz the WTO.

Just when large-scale violence most seemed likely to erupt, the collective “we” created a show of unity and power that left even paid rock-throwers with no recourse but to stand down. All day and night Friday the Via Campesina and the Korean delegation led and/or participated in numerous internal and external meetings, using the moral authority of the farmer/indigenous peoples’ cause and the sacrifice of Mr. Lee to forge a collective unity with students, black blocks, trade unions, NGOs, you name it. Saturday showed our strength when we work together.

With the black blocks providing security from the provocateurs, and cordoning off the first 10 meters in front of the wire walls, more than a hundred women went forward with bolt cutters and began dismantling the walls, bit by bit. What a diversity of women it was! Indigenous women, punks, students, old women, young women, Mexican women, American and European women, African women. Once the wall was weakened, the Koreans supervised the attachment of 50 meter long, 4 inch circumference ropes to the top of the walls. Then thousands of people of all nations, races and cultures, punks, black blocks, peasants, etc., together pulled the walls down. Quite literally, the power of the people, united, pulled down the walls of the WTO.

When the walls finally fell, there stood thousands of riot police clearly spoiling for a fight, big time. Just when they thought we would attack them, however, the Koreans who were on the front line turned their backs on them, everyone else sat down, hundreds of flowers appeared, and we had a mass memorial service for Mr. Lee. Marcial of the MST then sang John Lennon’s Imagine for the crowd, the WTO was burned in effigy, and we got up and marched away. The police were left with their mouths hanging open in shock, with nobody to fight with. The hundreds of journalists who were present marveled at our collective ability to do the unexpected, to turn promised violence into moving peace, and to make a statement so powerful that the WTO could not hope to resist.

Oh, and by the way. I just got a call on my cell phone that the whole interior of the security zone is paralyzed by multiple “inside actions” and traffic is stopped everywhere.

Some chants from the march, for the newest martyr of the global farmers’ movement, from Via Campesina:

Todos somos Lee!
We are all Lee!

Lee, hermano, te has hecho Mexicano!
Lee, our brother, you have made yourself Mexican.

Lee, presente, hoy mañana y siempre!
Lee, you are with us, today, tomorrow and always!

Lee no murió, la OMC lo asasinó!
Lee did not die, he was murdered by the WTO!

The article has been edited for its headline and is part of a series of article that we are hosting this month, as we remember the sacrifice farmer Lee Kyung Hae made outside the WTO Ministerial conference in Cancun in September 2003.  La Via Campesina marks September 10 as the International Day against WTO and Free Trade Agreements, in the memory of Lee Kyung Hae and the continuing struggles of peasants to resist the neo-liberal agenda.