Home » How a meeting in Cork could save rural Europe 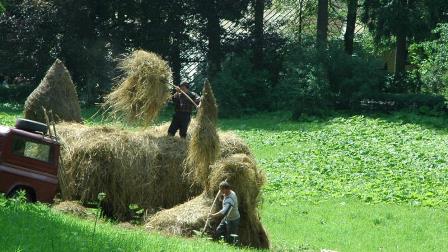 The CAP’s failings mean grassroots movements and national governments are starting to take matters into their own hands. Policymakers at this week’s Cork conference on rural development must take heed, write Stanka Becheva and Ramona Duminicioiu. First published by EurActiv.com

Cork, a picturesque city in South-West Ireland might not ring a bell to many people, and the event taking place there this week even less: the Cork European Conference on Rural Development. Unless, of course, you’re somehow involved – for better or for worse – in the European Union’s agricultural debate.

But the impact of this meeting goes beyond farmers or those working in the food sector; they will impact on the future of the entire continent, because whether you live in the city or in the countryside, we all eat. And – with a few exceptions – that food comes from our rural areas.

This year’s conference, which marks 20 years since the signing of the then-groundbreaking Cork Declaration, will take place amidst waves of unrest and crises affecting EU farmers. Oddly enough, the document signed in 1996 intended to avoid this.

It highlighted the uniqueness of our rural areas, the need to preserve them and the importance of sustainable rural development, local biodiversity and cultural identity. Policymakers could already see the tell-tale signs that the magic promised by industrial farming had a catch: environmental, social and economic catastrophe.

The assessment made two decades ago in Cork would spread to other fora, as well as European and international institutions. It was the UN Food and Agriculture Organisation’s turn in 2014 to recognise the important role small-scale family farms played by declaring that year the International Year of Family Farming and later in the year its General Assembly endorsed the need to end hunger, achieve food security and promote sustainable agriculture in its sustainable development goals.

However, things on the ground have been moving in the opposite direction.

The latest reforms of the EU’s Common Agricultural Policy (CAP) have tipped the scales towards big industrial faming and the consequences on the ground are stark. The attention and funds going towards measures supporting rural areas and sustainable small scale production are dwarfed by the money spent on supporting the conventional food and faming system.

The knock-on effects cannot be overstated: just 3% of farms now dominate half of the continent’s farmland. Meanwhile, the drop in milk prices triggered by CAP-driven overproduction has pushed thousands of dairy farmers to abandon their livelihoods and hundreds in countries such as France to suicide. EU inaction to redress this is simply consolidating the power of ‘1,000 cow farms’ and wiping the rest from the map.

Corporate food producers are also given a helping hand through proposed free trade deals such as the TTIP and CETA. Through these two, Europe’s small and medium farms wouldn’t stand much of a chance against a flood of cheap US factory farm imports. Only the big and powerful would survive, the devoted followers of an economy of scale approach.

This summer, some national governments have started to wake up to these crises, and are slowly starting to improve policies.

Many of these come in response to the threat of farming wipe-out from abroad – or through the TTIP, should it be agreed. In Romania, large supermarkets will soon have to source at least 51% of their vegetables, meat, fruit, honey, eggs and dairy from ‘short supply chains’ – in other words, food produced in the country.

France will soon introduce mandatory labels of origin for dairy and meat products – and Italy, Lithuania and Portugal may follow suit, while Poland will introduce a voluntary ‘Produkt Polski’ scheme for processed meat in 2017.

These policies are far from complete – the Romanian law – drafted under pressure from large farmers’ unions at the expense of peasants – leaves the definition of ‘short supply chains’ open to interpretation and fails to address supermarket strangleholds over contract negotiations. Labelling schemes alone do not go far enough, and the flip-side of formalising labour laws means undocumented migrant workers lose out.

These individual government actions highlight the failures of the current CAP, and its inability to propose collective solutions to common problems.

Away from capital cities, the real action is happening – as ever – locally, where grassroots movements and those working at the local level are streets ahead of policymakers. Across Europe, supply chains are being cut by local initiatives, with community-supported agriculture projects and farmers’ markets re-localising food and re-empowering farmers.

At the epicentre of the fightback is Romania, where three small farms disappear every hour. This October in Cluj-Napoca, around six hundred small-scale farmers, peasants, indigenous peoples, academics, local politicians and more will meet for Europe’s largest-ever food sovereignty gathering – the second European Nyéléni forum. On the menu: a bottom-up reorganisation of Europe’s food system that empowers farmers and promotes sustainable farming practices.

So, hope and alternatives do exist and are expanding. But local initiatives need to be bolstered by public policies, supported by regulation and public funds. Which is why at this year’s Cork conference EU policymakers must face the facts: it’s time to move away from corporate, industrial agriculture and back to the spirit of the original Cork declaration of 1996: boosting genuinely sustainable, community-supported agriculture.

Stanka Becheva campaigns on food and farming at Friends of the Earth Europe and Ramona Duminicioiu is a Romanian peasant farmer and coordination committee member of the European Coordination Via Campesina.