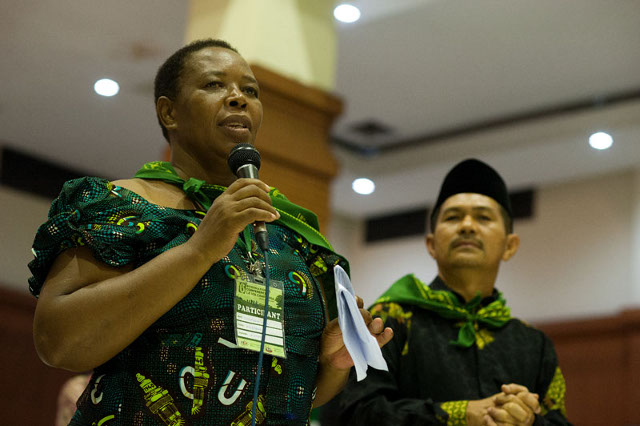 (Yakarta, June 12, 2013) Following the decision of the Vth Conference of La Via Campesina in Maputo in 2008 to move the International Operational Secretariat (IOS) to Africa in 2013, a process was started to identify a suitable location. After consultations in the two African regions, the African members of La Via Campesina made a joint proposal to have the IOS hosted by ZIMSOFF in Zimbabwe. This proposal was received, discussed and accepted by the International Coordinating Committee. Here at the VI International Conference of La Via Campesina in Jakarta the proposal was received and confirmed. The formal transition will take place at the end of 2013 and in the coming six months the necessary facilities will be set up under ZIMSOFF to ensure a smoothe transition.

ZIMSOFF is a national organization of small scale farmers with the goal to improve the livelihoods of small scale farmers, empower them to defend their rights and promote agro-ecological, peasant based agriculture. ZIMSOFF has 19000 families that are member, organized according to the  4 main regions.

The ICC has visited Zimbabwe several times to meet the local organizations and to better understand the realities of peasant families and small farmers on the ground. Based on these visits as well as available research, La Via Campesina has concluded that important positive changes are taking place in Zimbabwe through the land reform process.

In the years since independence in 1980, various land reform measures including Constitutional change, had failed to break the grip of the minority of predominantly white farmers.

In addition, structural adjustment programmes and trade liberalization had devastating effects on agriculture and the peasantry: food reserves were abolished, there were no stable prices, and foreign agricultural products were dumped on the domestic market.

In 2000, in the context of dire economic conditions and frustrated at the lack of government progress on land reform, peasants themselves initiated occupations in a desperate attempt to achieve one of the main pillars of their liberation struggle: land redistribution.

Since then, 175,000 families have gained access to land and around 700,000 new jobs have been created for agricultural workers. The production of food crops has increased significantly as land is used in a far more intensive way compared to model of agriculture that was the legacy of British colonialism.

Nonetheless, the challenges facing peasant farmers — not only in Zimbabwe but across Africa — are huge. La Via Campesina has a clear vision of the policies governments must implement in order to achieve food sovereignty and to support the livelihoods of our members and all peasant producers and communities.

ZIMSOFF and other African peasant organizations are already working to advance these policies at the national level, however the task is huge. In addition to the difficult political and economic contexts in which many of our members are working, Africa is being swept by a wave of land grabbing and climate change will have a particularly harsh effect in many regions of the continent.

La Via Campesina is committed to standing with and supporting our member organisations across Africa, as well as all peasant and small-farmers organisations and others fighting for the rights of peasant producers and for food sovereignty. The decision to relocate the IOS to Zimbabwe is a sign of our collective commitment to the struggles of our brothers and sisters in Africa and a great opportunity to strengthen and widen our networks of solidarity and struggle.

Since the beginning of La Via Campesina in 1993, the IOS has been based in three regions: Europe (Basque Country and Brussels) from 1993-1996, Central America (Tegucigalpa, Honduras) from 1997 – 2004, and South East Asia (Jakarta, Indonesia) from 2005-2013. A regular rotation of the IOS helps the movement to strengthen its functioning, maintaining a decentralized way of working and sharing responsibilities among continents and regions.