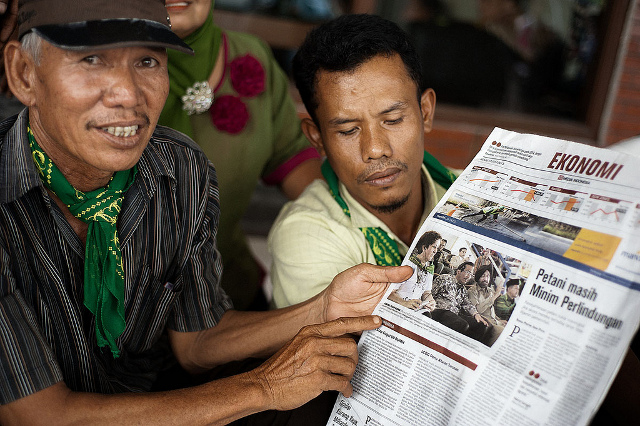 (Jakarta, June 9, 2013) After three intense days of women’s and youth assemblies, this afternoon we joined in the celebrations of the opening ceremony to welcome La Via Campesina’s Sixth Conference to Jakarta.

About 3000 peasants, women and men from around the world, met today to celebrate the opening ceremony of La Via Campesina’s VI International Conference. It was a typically hot afternoon when participants arrived in Jakarta’s Padepokan Pencak Silat, in a stadium renamed the ‘Peasant Victory Stadium’ for the event.

La Via Campesina holds an international conference every four years, in which hundreds of peasants participate, from every continent. It is the highest forum for collective decison-making, debate and constructing a common agenda of mobilisation for the biggest peasant movement organisation on Earth. The central aim: create an alternative model of rural development.

Previous hosts for La Via Campesina’s conferences have been Mons, Belgium (1993); Txacala, Mexico (1996); Bangalore, India (2000); Sao Paolo, Brazil (2004) and Maputo, Mozambique (2008). The sixth conference takes as its backdrop the city of Jakarta, Indonesia. Today we have celebrated the opening ceremony.

The opening Ceremony of La Via Campesina’s Sixth International Conference.

Peasants from around the world and representatives of the authorities of the Republic of Indonesia were present today in the inauguration ceremony, an event charged with colour and emotion, which was not lacking in music, with traditional instrumental performances, dances and songs from around Indonesia.

Henry Saragih, representing the Indonesian Peasant Union (Serikat Petani Indonesia), the peasant organisation which has been hosting the event, gave peasants in the audience a heartfelt speech in which he recalled the struggles which unite peasants from around the world. He highlighted the struggle for food sovereignty and peasant rights, for agrarian justice and access to the land, against the green revolution, the free market and free trade agreements. Saragih also didn’t forget the Palestinian people at this moment: “Colonialism ended half a century ago, but nevertheless Palestine continues to suffer, long live the Palestinian people”, the leader shouted to great applause.

The ceremony was replete with entertaining performances, pleasant interludes between the speakers, including amongst others a display of Pencak Silat (an Indonesian martial art). In fact, the conference venue is a sports complex where various Asian martial arts are practiced, especially Pencak Silat, which gives the venue its name.

The ‘Mars Petani’ (peasant’s march) is also a well-known song in Indonesia. Around ten women performed it during the ceremony. Each dressed in a different colour, they also sang “Wahai Pemuda Pemudi” (Ah, the young men and women), in the typically lilting musical style of the region.

Among other speakers in the ceremony, we heard form Itelvina, a peasant leader from LVC Brazil. She proposed developing creative forms of confronting the various crises we face: climate, financal, food, politcal, cultural, ethical and of values which affect the whole society. “The moment to point fingers has arrived”, Itelvina said, “It is time to start accusing nation states and governments of supporting political favouritism in the interests of the corporate food and agriculture system.”

Chants of “Long Live La Via Campesina”, echoed around the stadium, mostly in Bahasa Indonesia, the local language, and in Spanish from the audience. The atmosphere calmed down when the Indonesian Agriculture Minister Suswono went up to the podium. He announced that agrarian reform was a priority for the governement, and expressed his wish that agricultural trade unions contibute to discussions around the issue within their organisations. “We should be self-sufficient and diversify our food production, as we have such a great potential”, he said.

For his part, the FAO representative in Indonesia, made a convincing argument of the necessity to increase investment in agriculture “to eradicate world poverty” in order to build a fairer world, emphazising all the different links in the food chain.

To conclude the opening of the VI Conference, a spiritual ritual took place, in which local peasants made an offering, a typical means of celebration, in which cooked rice was distributed to peasants representing each region.

For land and people’s sovereignty. In solidarity and struggle.

Communication team of la Via Campesina