Home » La Via Campesina International passes on the torch to Africa 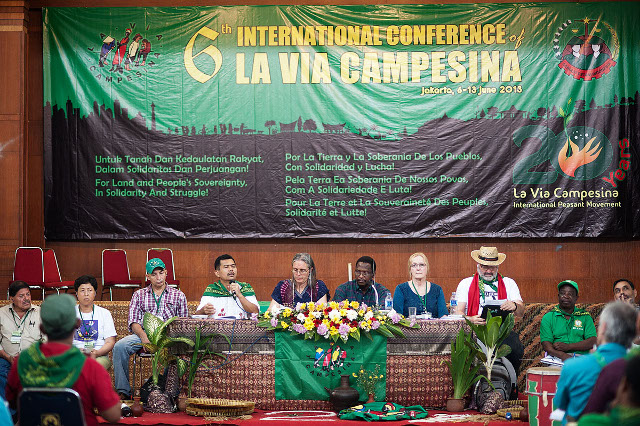 (Jakarta, June 12, 2013) ) La Via Campesina, the global movement of mass based peasant organizations, will soon come to the end of its 6th global conference that is being held from the 9-13 June at the Padepokan Pencak Silat Indonesia, Taman Mini in Jakarta, Indonesia. The movement has made crucial decisions regarding it future strategies, new members, new coordinators and other important internal issues.

LVC leaders revealed that the international operative secretariat that has stayed in Asia for the past 8 years, will now move to Zimbabwe in Africa. “We will pass on the torch to Africa this year. Africa is a very important continent because the transnationals have their eyes on it. They are grabbing land there and want to impose the green revolution model with GMOs. We in Asia already know that the green revolution has failed here. We extend solidarity and unite with the African peasant movements to stop this recolonization and choose a development path that will actually benefit the African people and peasants,” said Henry Saragih, global coordinator of LVC and head of the SPI.

Talking about the future strategy of the movement, Elizabeth Mpofu, of the Zimbabwe peasant organization that will start hosting the LVC international headquarter next year stated that, “In the coming years we will continue to intensify the debates and recommit to all our key issues that were decided during our last global conference in Maputo, Mozambique.” The main action plan will be publicized on the 13th June, but Mpofu hinted that there would be emphasis on strengthening the campaign to end violence against women, giving more space to youth, and also on promoting a positive agenda through the global seeds campaign.

The Maputo declaration of LVC also lists the key issues as building a global food sovereignty movement with allies, pushing for a UN Declaration of Peasant Rights, opposing free trade and transnational corporations, promoting agrarian reform and stopping climate change among others.

Jeanne Verlinden, a youth leader from the Peasant action movement (MAP) in Belgium said that, “as youth, we are very proud that LVCs completes 20th years this year and that it is moving to Africa to strengthen the peasants there. As youth, we want to see a world society that values its farmers and peasants and acknowledge our right to produce society’s food. We have made a commitment to ensure the future of sustainable peasants agriculture and protect mother earth.”