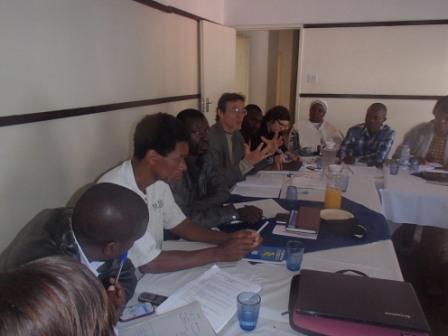 (Zimbabwe, Harare, July 18, 2014) ZIMSOFF organized a preparatory meeting on the 2nd of June to discuss the implications of the new regional seed policies, the Common Market for Eastern and Southern Africa (COMESA), Southern African Development Community (SADC) and Africa Regional Intellectual Organisation (ARIPO) namely the seed policy harmonization and Plant Variety Protection (PVP), on the smallholder farmers in Zimbabwe. Sixteen ZIMSOFF Council members (who also are farmers) and representatives from the African Centre for Biosafety (ACB) and Third World network (TWN) participated in the discussions aimed at building the capacity of the smallholder farmers to understand and defend their seed rights nationally.

The proposed regional seed policies, if adopted, will negatively impact on indigenous seeds which ZIMSOFF and La via Campesina promote. The COMESA seed protocol will open national borders through easing market and regulatory requirements on registered commercial seeds; while the SADC and ARIPO will promote the “commercial breeders’ rights” through Plant Variety Protection based on “DUS” (Distinctiveness, Uniformity, Stability). In general, the former, will flood both the regional and local markets with hybrid and genetic modified (GM) seeds and thus push out traditional seeds, the latter, recognizes and promotes commercial breeders and criminalize traditional breeders, who are peasant farmers. The ZIMSOFF Chairperson and La Via Campesina General Coordinator, Elizabeth Mpofu, in her opening remarks, urged the farmers to take these new developments seriously and hold the government accountable.

Mr Delma Ndlovu, the ZIMSOFF vice-chair, urged the farmers to create seed banks, market traditional seeds and promote the consumption of indigenous vegetables and crops, which conventional research has ignored, within their communities. He noted that while it is now widely acknowledged that a smallholder-based, agro-ecological food production system is the best way to eradicate hunger and reduce the impact of agriculture on climate change, less attention is given to the role farmers’ play in sharing the lessons they have learned. Building on a farmer-to-farmer approach, the ZIMSOFF is interested in training community facilitators and trainers, helping them develop a horizontal and participatory learning system.

Ms Mariam Mayet of ACB said that the new seed policies are being pushed by the Bill and Melinda Gates Foundation through the Alliance For Green Revolution in Africa (AGRA), a new Green Revolution focused on improving agricultural productivity in developing countries, which in Africa finds resonance in the new agricultural policy frameworks such the Comprehensive African Agriculture Development Programme (CAADP) and the new SADC Regional Agriculture Policy (RAP).

The ZIMSOFF farmers, at the end of the meeting, agreed to take the following actions and positions:

Zimbabwe Small Organic Farmers Forum (ZIMSOFF) is a forum for smallholder farmers practicing organic agriculture in Zimbabwe and was formed to create and nurture a dynamic alliance of Smallholder Farmer Organizations (SFOs). It promotes organic farming, processing and marketing, in partnership with PELUM Zimbabwe Service Provider Organizations (SPOs) to uplift the welfare of smallholder farmers in Zimbabwe through participatory ecological land use planning and management.