Home » The government should design a seed policy specific for smallholder farmers, says the ZIMSOFF farmers 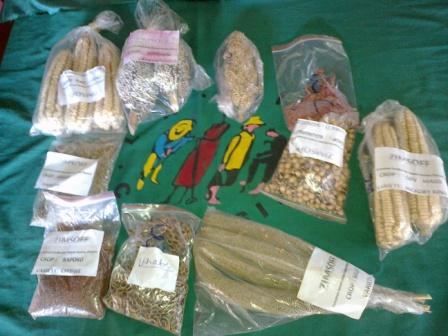 The farmers highlighted that the SADC and COMESA processes are closed systems with minimal participation of CSOs and smallholder farmers, and thus, most of their issues such as the protection of indigenous knowledge systems and farmers’ rights, and the adoption of agro-ecology to achieve food sovereignty, have not been included in national and regional policies which affect their livelihoods.

The presentations focused, at national level, on the evolution of seed laws, the current seed and trade laws, and the government’s position to the proposed new laws. At the regional and international level, the issues included UPOV/ARIPO, proposed Common Market for Eastern and Southern Africa (COMESA) and Southern African Development Community (SADC) seed protocols and the related international treaties in existence and their implications. The government officials assured the smallholder farmers that Zimbabwe has not yet ratified the protocols. Both the ARIPO and SADC Protocols on Plant Breeders Rights (PBR) are still under discussion and the drafts are yet to be submitted to member states and thus, the government has not taken a position at the moment.

These protocols were proposed at the SADC Heads of States meeting in Dar es Salaam in 2004 when most countries, including Zimbabwe, were facing food and seed shortages. The movement of seed materials within the regional countries was too cumbersome due to bureaucratic hurdles at the ports of entry and this affected timely delivery of seeds to recipient countries. The governments therefore proposed to harmonize seed policies as a quick solution to expedite the export and import of seed. However, the government official indicated that the country has the most stringent conditions on registering seed companies. He also added that member States have room to deny entry any genetic material on ecological and environmental grounds.

The officials acknowledged that the registration fees are high, beyond the reach of smallholder farmers. This is meant to deter any individuals who are not serious from engaging in the process. At the moment there are 43 Plant Breeders in Zimbabwe. The government will consider creating seed policy for smallholder farmers as they are breeders too. The existing seed policy was meant for private companies and was only amended to include smallholders after their outcry. The government acknowledged the lack of information on these policies in local languages which has affected smallholder farmers’ participation in the processes.

Elizabeth Mpofu, ZIMSOFF Chairperson and General Coordinator of La via Campesina, highlighted that the proposed protocols, drafted with minimal participation of smallholder farmers, will have a major impact to livelihoods of smallholder farmers who depend on indigenous seeds and agro-ecology.

Farmers were tasked to formulate a vision of where they want see ZIMSOFF heading towards and they came up with the following statement: Empowered smallholder farmers that can participate in agricultural policy formulation and promoting agro-ecology and farmer led on indigenous seeds systems.