Home » Starved of Justice and Sovereignty, Social Movements Fight for Way Out of Global Food Crisis 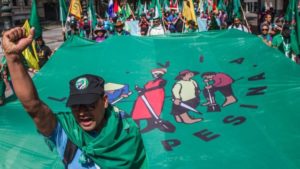 First published by Toward Freedom  on September 29, 2017

Tackling problems underlying the food crisis demands that producers and consumers, including those in the global north, recognize that the causes of opposing crises of malnutrition and obesity are one in the same: an undemocratic, corporate-controlled food system.

Small farmers and rural social movements around the globe are still struggling to transform food and agriculture 10 years after the world food crisis sparked widespread famine, hunger, and a wave of social unrest. This crisis unfolded at the same time that the largest multinational agribusiness corporations raked in record profits, laying bare the painful paradox of global capitalism and a food system that enriches a few while starving many.

The 2007-2008 food crisis shot commodity prices to their highest levels in decades and exacerbated food insecurity in poor communities. As a result, the number of people living in hunger in the world rose to one billion, while the underlying causes of the crisis remain unresolved.

Titled “The World Food Crisis: The Way Out,” the more than 100-page report details the struggles led by campesinos, women, and other social movements to democratize the food system, build resilient grassroots alternatives rooted in food sovereignty and climate justice, and fight for human rights and dignified livelihoods. The report highlights these struggles following the “awakening” brought on by the world food price crisis 10 years ago.

The report spotlights grassroots efforts like the recent uprising in Argentina. In this struggle, Indigenous people, campesinos, doctors, lawyers, and other community members are resisting harmful crop fumigation and rejecting the wholesale selloff of land and seeds to agribusiness giants like Monsanto. The focus on such topics underlines the 2017 report’s argument that struggle for transforming the food system comes down to a conflict between “two opposing visions of life, production, and socioeconomic-ecological relations.”

Ramping up the “momentum for change” and working for “immediate and longer-term solutions” must be priorities in the movement to ensure that food is seen as a human right, not a commodity, argue report contributors Sophia Murphy and Christina M. Schiavoni. “Now exposed, the cracks in the food system will only widen,” they explained in the report’s article on guaranteeing the right to food.

“To have the wherewithal to feed humanity into the future,” Murphy and Schiavoni wrote, “we urgently need to build up resilient local and regional food systems and address the extreme concentrations of power in national and international markets.”

Soledad García Muñoz, first Special Rapporteur on Economic, Social, Cultural, and Environmental Rights of the Inter-American Commission on Human Rights, agreed. She argued in a statement that a “better distribution of power and wealth” and a stronger commitment to human rights are key to battling the food crisis.

The report goes on to highlight experiences of resistance, from women-led milk cooperatives in Somaliland to the struggles against chemical-intensive soy monocultures in Argentina. The stories of grassroots community action highlight that transformation of the highly unequal global food system will come from the bottom up – from the campesinos, women, and Indigenous people at the foundation of the world’s food supply who are most affected by food and climate crises.

Sharing experiences of alternative food production models and successful stories of resistance are undoubtedly both timely and urgent in the wake of last year’s Food and Nutrition Watch report, which found that the ever-increasing monopolization of control over seeds and agricultural resources into a few corporate hands – epitomized by the mega-mergers of the “Big Six” agribusiness multinationals – gravely threaten human rights, biodiversity, and food security.

Authors highlight that hunger and food insecurity are the results of concerted policy decisions that continue to prioritize trade liberalization, market-oriented solutions, corporate consolidation, and large-scale land grabs at the expense of the right to food and nutrition. In response, social movements are battling to bring visibility to an alternative vision of food sovereignty, a comprehensive concept that calls for reclaiming the food system from corporate control and empowering farmers with decision-making authority over food and agriculture, including what and how they choose to produce.

The report’s concluding section outlines ways forward and is based on consultations with civil society organizations such as La Via Campesina, considered the world’s largest social movement. The authors argue that confronting the food crisis calls for recognizing the fact that communities in rich and poor countries alike are affected. From the global north to south, the right to food cannot be fully realized under the current industrial model of food production and distribution. Rather, “radical transformations of the dominant socio-political and economic systems” and social movement mobilizations, the report states, are necessary to promote the “appropriation of the commons by and for the people,” expand the political imaginary, and foster deeper understanding of issues “perceived as unchangeable.”

“The misconception persists that the right to food and nutrition concerns mostly countries that are plagued by famines and chronic malnutrition, and has very little to do with the increasing rates of obesity and associated non-communicable diseases caused by the widespread imbalanced and industrialized-based diets,” the report explained, pointing to a trend of food sovereignty being “sabotaged” from the Western Sahara to the United States. “The reality is that violations and abuses of the right to food and nutrition are not limited geographically, but manifest in a wide variety of forms across the world.”

Following a decline in undernourishment for more than a decade, world hunger has been on the rise in recent years, with the estimated number of undernourished people increasing from 777 million in 2015 to 815 million in 2016, according to the U.N.’s Food and Agriculture Organization. Meanwhile, adult obesity has been rising at an accelerated rate in every region of the world, the FAO reports, bringing increased risks of health problems such as diabetes and cardiovascular diseases to about 13 percent of the world’s adult population.

But despite the bleak outlook, social movement organizing over the past decade offers reason for hope about the future of the food.

“The last decade has seen growing coordination and solidarity among rural constituencies and innovative approaches by young people to foster food sovereignty,” the report continues. “Social movements now have new opportunities to create and seize participatory decision-making processes around public policies, at national and regional and also at the U.N. level.”

The decade since the world food price crisis is only the most recent chapter in a long struggle for control of the food system, and despite progress, it undoubtedly continues to be an uphill battle.

“The challenge now is how to implement these tools,” the report concludes, “and how to translate the opening of institutional spaces into concrete action and towards positive change.”

Heather Gies is an editor at upsidedownworld.org.