Twenty four years ago,in Mons Belgium, a group of small farmers – who were members of grassroots peasant’s movements joined hands to create a common voice. They were fed up of being represented by agribusiness and large entrepreneurial farmers who supported corporate globalisation and who did not represent small holder family farmers. Two decades later, this global movement has grown more than three fold in size, with 170 organisations as its members (including the new members who are ratified at the VII International Conference in Derio). It is more diverse and more complex than ever and yet maintains a horizontal organisational identity that is united by the nature of grassroots struggles.

On the opening day of the VIIth International Conference of La Via Campesina, Eberto Diaz, a member of the International Coordination Committee(ICC) and Alazne Intxauspe a young peasant from Basque Country and member of EHNE Bizkaiamoderated a panel discussion with Paul Nicholson (EHNE Bizkaia), Francisca Rodríguez (ANAMURI), Chukki Nanjundaswamy (KRRS), Ndiakhate Fall (CNCR) – where they collectively reflected upon the movement’s journey thus far and the challenges and opportunities that lay ahead.

“La Via Campesina was born to give a voice to the voiceless,” said Paul Nicholson of ENHE Bizkaia.

“It was instinctive, we knew we wanted to have our own movements and organizations and oppose neoliberal policies- building a peasant culture of solidarity and creating a class awareness as peasants.”

Back in 1993 the crisis of peasant agriculture had triggered the first wave of forced migration . It was in this context that La Via Campesina started its first ideological struggle against what the speakers called ‘the monopoly of thought’.

“While we started out with a banner for peasants, so many more joined us. There was only a handful of women at the time, and then we said that within La Via Campesina (LVC) we had to make a space for women, a new way of facing the issues we have and recovering the soul from the green revolution.,” said Francisca Rodríguez (Pancha) who is a member of the National Association of Rural and Indigenous Women (ANAMURI) in Chile.

While Via Campesina has evolved over the years, the speakers admitted that much was to be learned. They have welcomed more and more members and acknowledged that there is also a new generation inside the Via Campesina family.

“I always say that I have grown up in the movement. I started as an observer in 1993. I think Via Campesina is the only movement that has made a conscious effort to create space for women and youth – and this is clearly important to ensure the movement’s success. It cannot sustain without them. We have seen many global networks/alliances that come up for an issue and then collapse, but we are here for a long lasting commitment,” said Chukki Nanjundaswamy, from Karnataka Rajya Raitha Sangha (KRRS)

But its not just capitalism that confronts Via Campesina today. Participants acknowledged that there is a growing wave of authoritarian and reactionary forces gaining power through right-wing populism, across the world. Many of these far-right groups under the guise of fighting for “food sovereignty” are in reality instigating and spreading hatred, xenophobia, and violence towards immigrants, and refugees. They hide the fact that it is the neo-liberal capitalist policies that has dried up jobs and has created unprecedented levels of inequality in the world.  Instead, they are stoking fears through reactionary propaganda that lay the blame of unemployment on immigrant workers. How does LVC distance itself from these and challenge this danger?

“We need to fight this. Our idea of food sovereignty is based on a framework of solidarity and support for each other – not hatred. We need to be able to give a voice to the voiceless, particularly to the migrants across the world. We cannot accept a food sovereignty of the type that the far right proposes – that is we should get everything and others get nothing! Such hatred and xenophobic tendencies must be resisted,” said Paul Nicholson. 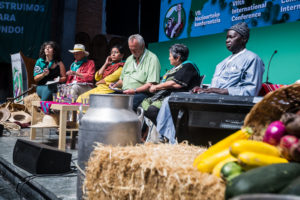 While talking about the main challenges and opportunities, Ndiakathe Fall of Senegal pointed towards the creation of and then implementation of the UN Declaration on the Rights of Peasants and other People Working in the Rural Areas. “La Via Campesina is working really hard to make sure that poor and working people can have dignity.”, he said.

Protecting peasant agroeoclogy from co-option is another challenge that lies before La Via Campesina. Agroecology is now the buzz word and has become ‘fashionable’ to the extent that even corporations including agribusinesses, are staking claim to it as part of their ‘green-washing’ efforts!

“Alliance building with other peoples’ movements has to be a priority for us, where multiple voices can be heard and where many can fight their struggles with us – indigenous people, afro decedents – we welcome all,” said Pancha.

“Strengthening our peasant culture and coming together as one – how can we unite different classes – how can we come together on the same farm – whether it is worker or farmer?- this is really a challenge for us, said Paul. “We need to build our own peasant thought – our own reflection”.

“The rural urban alliance is a huge challenge. We all eat food, we must come together, said Chukki Nanjundasamy.

While celebrating Via Campesina’s achievements in training and formation of their cadre, the speakers reflected that Via Campesina must commit to this. It is the only chance to maintain a strong movement in the future and members who are able to critically think and transform the world.