Approximately one thousand people denounce two years of impunity of the crime that occurred with the rupturing of the dam in Mariana, Minas Gerais (MG).

“They knew it would burst,” sang a thousand people in chorus who came from diverse regions of Minas Gerais, Espirito Santo and even Rio de Janeiro. At 378 Almirante Guilherm Street, it looks like just another building in the Leblon neighborhood in Rio. But that is where one of Vale S.A.’s offices is located, the largest iron ore producer in the world and the one of the two companies responsible for the largest socio-environmental disaster in the world.

First thing in the morning on Monday, October 02, the populations affected by the Fundão tailings dam that burst in November of 2015, marched to denounce the impunity of this crime. Samarco, owner of the dam, is controlled by the Brazilian mining company Vale and by the Anglo-Australian company BHP Billiton.

“While they are relaxed inside their air conditioned building, all of us, the people affected by the mining companies’ crime (Samarco, Vale and BH Billiton), these two years we have lived with the lack of water, health problems and a lot of mud,” said Simone Silva, resident of the municipality of Barra Longa, MG. 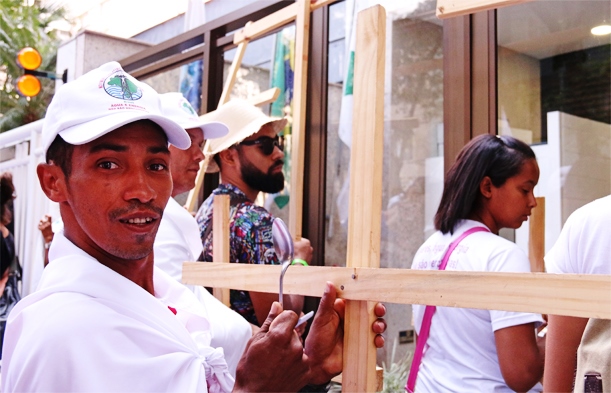 At the protest, the affected people carried 19 crosses which symbolized the people who were killed as a result of the dam’s rupture. After one minute of silence, they called out in chorus the names of each of the nineteen victims.

For Joceli Andrioli, of the national coordination of the Movement of People Affected by Dams (MAB), the main complaint is the worsening of the situation for those affected over these two years. “Between legal agreements and empty speeches, what lasts is the perpetuation of the crime that happened two years ago. In addition to impunity, what remains is denial of rights.”

This action is part of the 8th National Encounter of MAB, which is happening October 2-5 at the Terreirão do Samba, in Rio de Janeiro, bringing together around 3,500 people impacted by dams in many regions of the country. This afternoon, at 4pm, will be the official opening with the presence of ex-president Luiz Inácio Lula da Silva.

What is it worth? 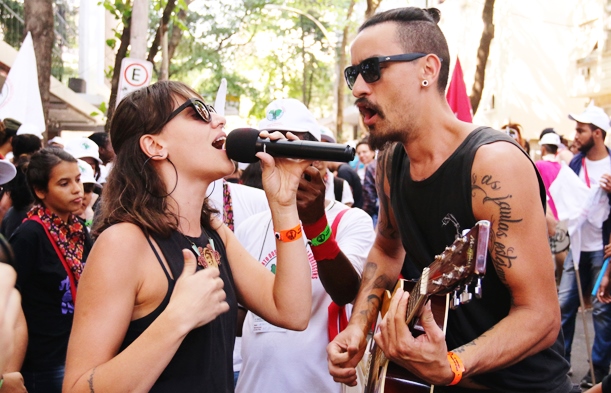 At the end of the action, musicians Emílio Dragão and Pricilla Glenda, member of the band Djambê, of Minas Gerais, sang the song “Quanto Vale?” (“What is it Worth?”) which became song of resistance against the crime that occurred in Mariana.