Home » The many colours of corn

The first thing that hit me was the colour. Different shades of red and yellow lay sprawled across the floor, some a deep crimson, some golden, and others speckled with both hues. Admiring their beauty, I found myself wondering where these brilliantly coloured corn varieties came from. Surely, they must be a product of the lab, a new crop modified to lure customers.

“Far from it,” Abhilash, the young farmer who grew this wonderful crop smiled, “This is bannadha musukina jola.” He told me that this coloured maize, the traditional maize variety of Karnataka, was the result of a thousand years of seed conservation efforts led by indigenous communities.

Abhilash is a young farmer based in Hosamalangi village in Kollegala taluk of Chamarajanagar district. He comes from a farming family and his father, Rechanna, is a gene saviour, known for his work on paddy conservation.  Abhilash first came across coloured maize at Amrita Bhoomi, a farmers training centre in Chamarajanagar district. After graduating from college, he joined the training centre to master the different techniques of sustainable agriculture. He spent an entire year there, and got an opportunity to trace the origin of this flamboyant crop. 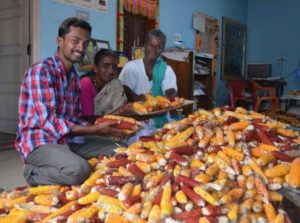 Abhilash and his parents with the harvest of coloured maize. Photo by Ruthuparna K

“Amrita Bhoomi, founded by farmer leader M D Nanjundaswamy, is situated at the foothills of B R Hills. Volunteers at this centre regularly visit the podu, or settlements, of the Soliga tribe who reside in these hills. They try to study and understand the traditional agricultural knowledge that is deeply rooted in this community. Belavadi Naveen Kumar, one of the volunteers, found the maize here and brought it into the institution for conservation,” he narrates.

Bannada musukina jola is sacred to the Soligas who reside in hamlets that are spread across B R Hills and M M Hills. One can see the rich colours of the different varieties of traditional maize like male jola, kuri pikke jola, koore jola, kempu jola and beli jola here. “Even if you sow single coloured seeds, you will still end up with multi-coloured cobs,’’ says Madegowda of Kalloddi podu.

The Soligas prepare mudde, dosa, roti and upma from coloured maize. They also make popcorn! However, after the advent of hybrid maize, this jewel gradually disappeared from their settlements, and other fields in the region.

As a result, fields of hybrid maize painted the landscape of the scenic Tibetan colony of Dhondenling located near the B R Hills. It required a fairly high share of chemical input. About a decade ago, the Tibetan authorities decided to shift to organic farming. Then it was found that traditional maize, which was once found in abundance in the region, was an ideal substitute to the hybrid one. Again, seeds were sourced from the Soliga tribe, and were multiplied in small pockets of land. At its peak, traditional maize was cultivated in over 50 acres of land. A staggering 17 quintals per acre of corn was produced during this time.

With a large inflow of this traditional variety, value additions were created by the local community. Rava, flakes, momos, roti, upma, soup and pudding were made from this corn successfully. These food items then made their way onto the plates of the Tibetan homes. However, the organic market was still in the initial stages then. The demand for traditional and organically grown maize just did not exist outside the community. And as time swept by, traditional maize gradually disappeared again, from the fields and the lives of the Tibetans. This can be considered as the first attempt at conserving the unique heritage varieties distinct to the region.

While it was a community effort at the Tibetan settlement, Abhilash decided to initiate the cultivation at his farm first, and then motivate others. After returning from Amrita Bhoomi, Abhilash decided to multiply and revive desi maize. Not having enough seeds, he travelled searching for them. He scoured B R Hills, but all in vain. He then approached Naveen Kumar, who had successfully multiplied them at a small scale, by handing them over to a relative in Arkalgud. Abhilash procured a whopping 20 kg of seeds from there.

“My village lies in the Cauvery basin and has been hit by severe rain failure in recent years. This has forced farmers to move away from the main crops — sugar cane and paddy — and look at alternative crops. They need crops that require less water,” he explains. He felt that traditional maize could be an answer to their woes.

Hybrid maize requires a large quantity of chemical fertiliser. This makes it harder for water to penetrate into the ground, and therefore this variety of maize demands extensive and constant supply of water. Since traditional maize can be grown in organic conditions, scarce rainfall doesn’t become that big a threat. It is also a smaller burden on the pockets of farmers as they don’t have to depend on external inputs, and above all, it assures seed sovereignty.

“Somewhere in the first week of March 2017, I planted the seeds in the vacant space in the two-acre mango orchard. As the summer swept through the land, water became scarce, and I had to install water sprinklers. The villagers laughed at me and made fun of me. They told me that my crops were going to fail. However, I turned a deaf ear to their mockery, and let my hard work speak for itself,” Abhilash recalls.

It was the middle of July, when he harvested 12 quintals of traditional maize. The villagers who once scorned him, now came to him for help. He supplied the seeds and shared the knowledge with them. “Before handing out the seeds, I made them promise to grow the maize organically. After all, this is key in fighting unpredictable rains,” he adds. Now, this young farmer is a role model for the farming community as he etches out an unwinding path towards seed sovereignty.

This is an excerpt from a story written by Ruthuparna K for Deccan Herald. To read the complete article click here.

Amrita Bhoomi was conceptualized during the ‘seed satyagraha’, the Karnataka Rajya Raitha Sangha (KRRS)’s fight for seed sovereignty against multinational seed companies’ attempts to impose patents on life. KRRS had a dream. It didn’t want to just keep protesting against things – injustice, bad laws, and corrupt politicians. It also wanted to create the world it wanted to see. For more visit the website.