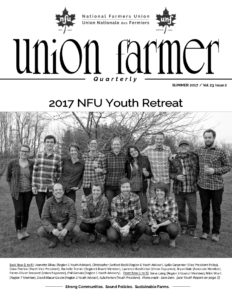 The growing season here in Ontario is off to a slow start, with cool temperatures and record breaking rainfall and flooding preventing us from getting onto our fields. This comes right on the heels of 2016, which saw the worst drought in Eastern Ontario in nearly 120 years. The climate instability and unpredictability of weather patterns we have experienced over the past several years is a constant reminder of our urgent task – to rebuild more resilient farming systems.

A large part of this challenge, of course, is growing a successful new generation of farmers. The National Farmers’ Union (NFU), Canada, is making a great contribution to this growth by consistently advocating for better policy, as well as by creating the networks new farmers need to succeed.

In April, we held our annual youth retreat, a unique opportunity for young farmers from across the country to gather,share and learn from one another. In recent years, our youth retreats have grown rapidly and have provided an entry point for young aspiring farmers to get engaged and involved with the NFU. This work has paid off in 2016. Nearly one third of national convention‐goers were youth and we now have active Youth Advisors in each NFU region. This year, we kept the youth retreat smaller and more focused. Participants included the regional Youth Advisors, as well as youth members that are currently serving on the national board and executive.

We were fortunate enough to have Aric McBay, an NFU‐O Membership Development Coordinator, farmer and author, lead a workshop and discussion about the elements that make a successful social movement.

We learned about the early organizing successes of the NFU, the effective community engagement of the prison farms campaign, and the leadership and collective actions of the United Farm Workers of America in the 1960’s.

It is crucial that we learn from the past and incorporate lessons from these successful movements into our work today.

We also discussed the idea that a productive critique of capitalism is essential to the struggle for food sovereignty and agroecology. The pillars of the capitalist food system – concentration of market power, vertical integration, exploitation of labour, and increasing corporate control of the resources required for food production – are completely at odds with the pillars of food sovereignty. The farm income crisis, food insecurity, diet‐related disease epidemics, and the externalization of environmental destruction are all just symptoms of a deeper root problem. 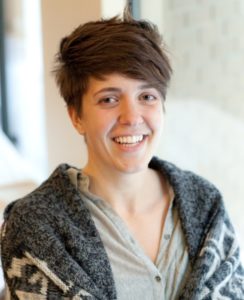 Ayla Fenton is the Youth President of NFU Canada

This is the message I brought when I spoke on the closing plenary of the Canadian Association for Food Studies (CAFS) conference at the end of May. Hon. Lawrence McAulay, Minister of Agriculture, attended the conference to announce that the government will be starting consultations for a national food policy, so we were asked to offer perspectives on what this policy should look like. The priority areas that Agriculture and Agri‐Food Canada has outlined are:

While these goals sound great on the surface, the idea of safe and affordable food is often used as a justification for policies that push small and medium‐ scale producers out of the game. I heard nothing in the Minister’s speech about valuing food producers, regenerating the land, reducing food waste, or building food sovereignty.

My message at the CAFS conference, as the only farmer in the room, was that a national food policy will do nothing to advance food sovereignty unless it challenges the capitalist structure of corporate control within our food system.

This message was loudly applauded by the room full of academics but ignored or explicitly rejected by the government representatives present during the subsequent discussion.

The NFU and our allies will have to speak loud and clear during this consultation process if we want to be heard.