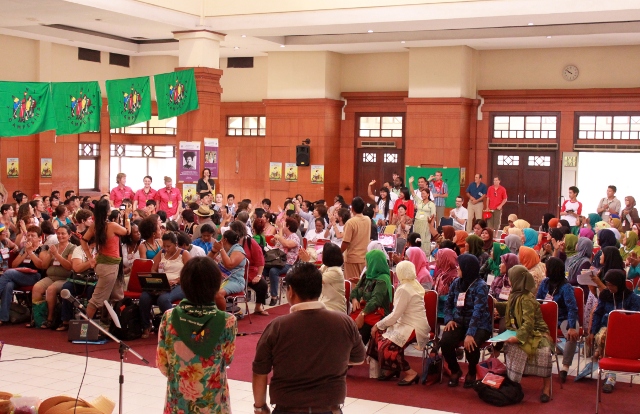 (Jakarta, June 7, 2013) Cheers of “Hooray for peasant women! We are the mothers of food sovereignty!” launched the IV Women’s Assembly of La Vía Campesina. The memory of María do Fetal, who died last year as a victim of violence, has been taken up again at this Assembly, which will also stress the importance of ending violence against women of the country and the city.

Today began a day of debate, in which more than 300 peasant women from every corner of the world have gathered, and in which the context of the crisis and capitalism and its consequences for women were analyzed.

Following the conferences in India in 2000, Brazil in 2004 and Mozambique in 2008, the meeting in Indonesia will focus on patriarchy, feminism and the construction of a peasant-based and popular feminism that recognizes the diversity of the women who are part of La Vía Campesina. Today begin two days of significant debate over their fights, their challenges and their aspirations, under the slogan “Sowing the seeds of action and hope, for feminism and food sovereignty!”

Elisabeth Mpofu, representative from the Organization of Small-scale Farmers of Zimbabwe, has condemned “the effects of capitalism that has influenced the Free Trade Agreements and has given rise to the deregulation that harms alternative development”. She has also insisted that the “crisis of capitalism has taken it out on the poorest, especially on women of the country, snatching away their access to quality markets and products”. “The financial policies imposed by the West have negatively affected the food sovereignty of the local communities, increasing the differences between rich and poor”.

During the panels, numerous references have been made to the defence of natural resources, acknowledging that the acceleration of climate change increases the suffering of the villages. In addition, attention has been drawn to the peasants for their strategic role as the driving forces of community values and food sovereignty.

Throughout the day, working groups have convened in which debates over how patriarchy and capitalism affect women’s lives have taken place. In addition, testimonials and experiences of women from Asia, Africa, America, Europe and Palestine have been presented.

The assembly will continue tomorrow with two roundtables on the political and organizational process for the women of La Vía Campesina and on the campaign Stop Violence against Women. An action plan will also be drafted by continents, with an agenda of common fights and actions, as well as training, communication and exchanges.

The mistica will be present on both days of the Assembly, to represent and express the confidence in achieving common goals, beyond cultures, the importance of coordinating the fights of the peasant men and women of the world in this historical moment.

This morning the day began with traditional dances and songs from Indonesia, and the day will end with the screening of the video “Peasant Women” created by LaVía Campesina, which acknowledges the political and leading role over the movement’s 20 years of struggle and action.

The experiences and points of view from the World March of Women have been narrated, including the condemnation of the violence exerted by capitalism, colonialism and patriarchy, promoting the campaign Stop Violence against Women.

Tomorrow the closing of the IV International Women’s Assembly will be led by peasant women from Asia and Africa. Before that, a final declaration will be presented, in which the women will expose their alternative proposal for confronting neoliberalism, and above all, the strategies for fighting against patriarchy.

Over the coming days, a total of 500 people, peasant men and women, small- and medium-scale farmers, landless peoples, women farmers, indigenous peoples, immigrants and farm workers from around the world will be participating in the VI Conference of La Vía Campesina, which aims to strengthen the movement, the alliances, as well as go more deeply into debates such as the right to food sovereignty, the right to land and the fight against capital and the neoliberal model.

Tomorrow the IV International Women’s Assembly will re-launch the campaign “Stop Violence against Women”, which was propelled by La Vía Campesina 4 years ago. It is one of the most daring and significant campaigns that has established itself as an international peasants’ movement, and is the result of a process of discussion and debate that materialised during the V Conference of La Vía Campesina in Maputo in 2008.

The goal is to condemn the violence faced by women, based on discrimination against class, gender, ethnicity and sex, which is worse for women in rural areas, and seeks to reinforce the commitment to building new gender relations within La Vía Campesina.

Communication team of La Via Campesina