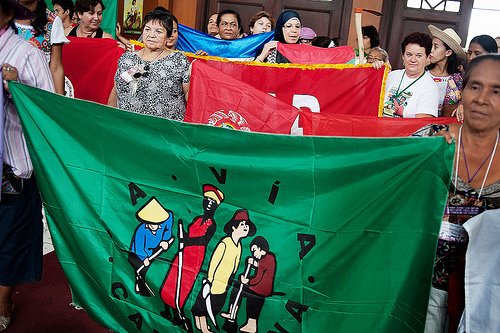 (Jakarta, 8 June, 2013) Peasants from around the world have come together at the Padepokan Pencak Silat Indonesia, Taman Mini in Jakarta from the 6- 13 June 2013 to celebrate the 20th anniversary year of the global peasants movement – La Via Campesina. This is also the occasion of the movements 6th global conference, a four yearly meeting when all the 150 and more member organizations come together to debate and define the future course of the movement.

About 500 delegates representing more than 70 countries have gathered at this conference showcasing the vast diversity of struggles, cultures and organizations within this global movement. There are small-scale farmers from all the continents, new young farmers, women farmers, and also from new regions such as Australia and the middle east, previously not members of LVC. “This is a moment of pride and celebration for us because we have completed a long journey of 20 years, made great strides and achievements despite limited resources. LVC and has brought together so many different rural and urban small farmers movements from across the globe in a common struggle for food sovereignty. This is a big achievement,” said Henry Saragih of the Serikat Petani Indonesia and the general coordinator of LVC.

The opening ceremony of the 6th conference will take place on the 9th June and hundreds of participants as well as national and international personalities will attend. It will start with the mistica- a spiritual and cultural act symbolizing the peasants struggle. Mistica’s from different continents will be organized on a daily basis at the conference. On one side of the venue will be an agro-ecology village showcasing farming experiences based on natural, traditional and non chemical farming methods from different continents. “Agro-ecological farming by peasants is the best solution to stop global warming and feed humanity with healthy local food. These are time tested proven methods unlike corporate driven harmful technologies like GMOs and toxic pesticides which ruin the earth, cause diseases and put farmers in debt,” said Dena Hoff, a woman farmer from the United States.

The sixth conference has already started with two separate assemblies for women and youth from the 6-9 june. “We have opened our global conference with a woman and youth assembly because in LVC we are making a serious commitment to give more space and importance to the role of women and youth in the movement,” said Jose Manuel Mateus, a youth farmers from Mozambique . The conference will end with a field trip for all the participants to a village in the Sukabumi district, an area that was previously a rubber plantation monoculture and has been reclaimed by Indonesian peasants in order to farm sustainably and feed their communities.