Home » Neoliberalism is over! Now is the time to build a new society: Korean peasants at WTO Minsiterial

Just as the Eleventh Ministerial Conference (MC11) of the World Trade Organisation (WTO MC) is underway in Buenos Aires, peasant organisations from Korea – whose members are in the city to make their voices heard – have published a statement denouncing WTO and its devastative effects.

Here is the full text:

Due to the rice market opening by WTO, the life of Korean peasants got devastated, and food sovereignty is breaking down. Rice is the staple food of Korea, and thus its stable production must be secured for the sake for people’s sovereignty.

At present, however, South Korea is compulsorily importing about 410,000 tons of TRQ rice each year under the WTO Agreement on Agriculture. It does not make sense that we should import rice using people’s tax when there is sufficient production in the country. This unreasonable and enforced rice purchasing is being carried out under the name of WTO’s international trade. The United States is taking advantage of this system and exporting huge amount of rice to South Korea.

Korean peasants have been fighting for 20 years against the opening of the rice market and some have even lost their lives in the process. Kyung-hae Lee and Nam-gi Baek are among those who were fighting bravely for food sovereignty without fearing death. It is time that Korea should escape the trap of rice market opening established by WTO. This is the very first step for peasants to survive and build our food sovereignty.

2. WTO out of agriculture!

WTO cannot negotiate food sovereignty. Agriculture is not the subject of free trade, and peasants are not the prey of transnational corporations.

During the last 20 years of struggle, we have always insisted that the WTO must stop discussing agriculture. We had already anticipated those harmful consequences WTO would bring about. In Cancun, Mexico, while WTO MC 4th of 2003 was taking place, comrade peasant Kyung-hae Lee stabbed himself on his chest, shouting “WTO kills peasants”.

Since the launch of WTO, food sovereignty in Korea has been collapsing. National food self-sufficiency rate keeps falling down, so as farm-product prices. Many people abandoned their life in rural area. Small scale farmers have lost their livelihood, and commercialized farmers take their place. Food system is being established by transnational companies, while peasant and agriculture are getting subordinated to capital. We peasants can no longer coexist with WTO system.

3. The era of neoliberalism is over. 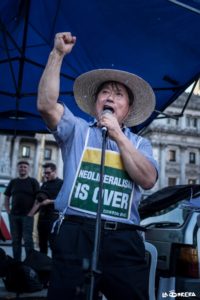 Neoliberalism, which guarantees freedom for large capital and exporters only, is the misfortune of humankind. It is time to move towards a new international order which is based on equality, and can guarantee the decent life of people.

Thousands of people fought in Hong Kong, where the 5th WTO Ministerial Conference was held in 2005 to prevent the devastation of agricultural ecosystems by neoliberalism. Thanks to their struggle, the DDA negotiation has lost its power.

Likewise, a large number of people around the world fought against neoliberal globalization represented by financial capital and the state power and global institutions that supported it. From “Occupy Wall Street” in US, to “Indignados” in Spain, and “EZLN(Zapatistas)” in Mexico, we people shouted neoliberalism generates only inequality and poverty. Neoliberalism and its symbol, WTO should be dissolved right now.

NEOLIBERALISM IS OVER!
NOW TIME TO BUILD NEW SOCIETY!