Home » European Milk Plan: A single drop of water to put out a huge fire 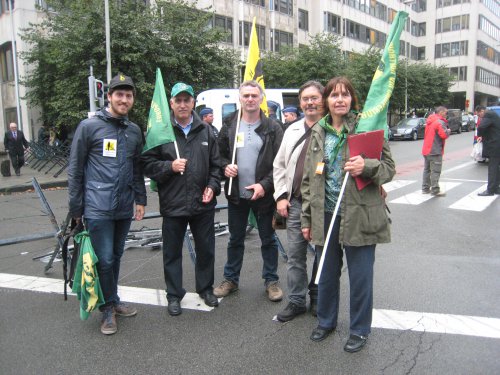 Nobody, not even the Commission or the ministers, can predict whether these measures will lead to a stabilisation of the market and an increase in milk prices

(Brussels, Thursday 10, September 2015) On Monday 7 September, the European Coordination Via Campesina (ECVC) carried out a demonstration in Brussels alongside the European Milk Board (EMB) to call for the implementation of measures to control production volumes, which are the only mechanisms capable of ensuring that fair milk prices are set.

Thousands of milk producers, including young producers, made their presence felt at the event to push for the 28 ministers for agriculture of the European Union, gathered at the extraordinary Council meeting, to adopt real measures that can provide an effective solution to the quagmire brought about by the liberalisation of the dairy sector as a result of international market saturation.

ECVC met with Luxembourg Minister Fernand Etgen, President of the Agriculture and Fisheries Council, which brings together ministers from each EU member state. The peasants’ representatives argued the need to adopt real measures to tackle the structural crisis in hand which is likely to force thousands of producers out of the market over the coming months. On Tuesday, ECVC also met with the cabinet of Phil Hogan, European Commissioner for Agriculture.

Considering how serious the situation is, the measures announced –providing direct aid, increasing private storage capacity, and promoting export of dairy products– seem inadequate to say the least, even cynical, when it comes to supplying milk to migrants.

Are the authorities merely “playing for time”? Are they simply waiting for producers to quit milk production so that others can reap the benefits of the upturn in the market, before the next crisis hits as part of a never-ending cycle?

Public regulation of the market was proposed to a Commission that swears by ’market orientation’, turning a blind eye to the many men and women that are being crushed by the system, and to European consumers who are frustrated because their expectations are never taken into account. It is, however, a sensible and inexpensive solution that consists in implementing a reduction in production volumes, employing the mechanisms jointly put in place between countries and producers, so as to ensure a balanced market.

The European Coordination Via Campesina is therefore calling upon its members to carry out a collective action to implement real solutions to ensure sustainable production.

Spokespersons on this issue: