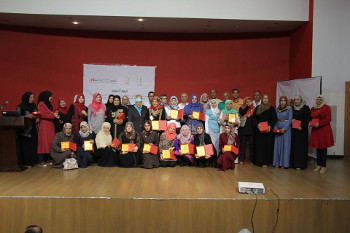 Gayatha confirmed that women cooperatives are a main source of income for many Palestinian families, pointing that 23% of the paid workforce are women, while the unpaid women workforce constitute over than 70% in agriculture sector. The Ministry of Agriculture’s priorities include strengthening Palestinian farmers’ steadfastness on their land through strengthening the women’s role especially in rural and marginalized areas, he added.

In his speech, the deputy governor of Hebron, Marwan Sultan, mentioned that these projects are the basis of building Palestinian institutions; since Palestinians are still suffering from food insecurity due to the Israeli control over natural resources.

In the same context, Seleia extended his appreciation to UAWC, the Ministry of National Economy, and the Ministry of Labor for their roles in the project’s success, pointing that this project gathered different Palestinian parties from the West Bank and Gaza Strip, especially agricultural cooperatives, to exchange experiences and skills.

UAWC’s Acting Director Fuad Abu Saif, confirmed that women’s cooperatives are one of the most important programs for UAWC, since it aims at strengthening Palestinian steadfastness on their lands.

The project manager Eng. Doaa Zayed, summarized the project goals and target area. It targets a number of cooperatives in Hebron, Nablus, Bethlehem, and Gaza Strip. This activity aimed at allowing successful women’s cooperatives to network with each other and with the Governmental bodies, she added.

The event included presenting cooperatives’ products and honoring the participants.