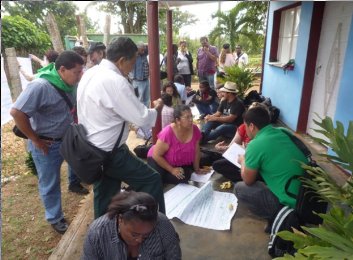 This is the conclusion of Olivier de Schutter, U.N. Special Rapporteur on the Right to Food, in the presentation of his report in March 2011. This statement is based on his research around the world. In the report, he forcefully called upon states to adopt ambitious public policies for supporting agroecology.

For a long time now, agroecology has been promoted within La Via Campesina (LVC) as a paradigm for achieving food sovereignty. Demonstrating this commitment are the more than 40 peasant agroecology schools in existence or being built within the movement. If we are convinced that agroecology is the path, these centers respond to a question that always strikes us as urgent: “how can we spread agroecology?” In this context, the success of the Farmer-to-Farmer method used by the National Small Farmers Assocation (Asociación Nacional de Agricultores Pequeños—ANAP), the LVC member organization in Cuba, is an inspiring example for the movement. ANAP and LVC organized the biannual international encounter of the Farmer to Farmer Agroecological Movement from the 17th to the 24th of November 2013, which was an opportunity for La Via Campesina to learn more about Cuba’s successful experience.

Of the 80 foreign participants in the international encounter (in addition to over 200 Cuban delegates), half were representatives of member organizations of La Via Campesina: from America (Nicaragua, Guatemala, Panama, Colombia, Brazil, Chile, Argentina, Haiti, the United States, Canada, Mexico) and Africa (Mozambique, Mali, Zimbabwe). The vast majority of these delegates stayed on for an additional week to study the Farmer to Farmer methodology, in a special course designed by the professors of ANAP’s national school. 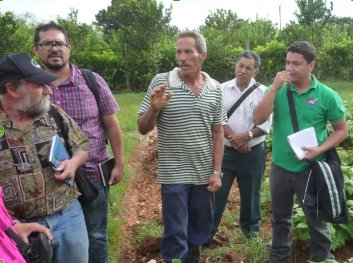 Farmer to Farmer breaks the conventional of vertical transfer of knowledge from the technician who arrives in the countryside to teach the “ignorant peasant farmer” what to do. Here the protagonist is the peasant farmer him or herself, with experiences to share based on his or her practical knowledge in his or her own terrain. The farmer becomes a “promoter”—with the job of reproducing his or her own knowledge.

A methodology born in Guatemala and later arriving to Mexico, Honduras and Nicaragua, it was in Cuba where Farmer to Farmer really “bore fruit”: reaching more than 100,000 families in only 10 years. The achievements of the methodology were visible to the participants in the international encounter, who were able to visit the agroecological farms of promoters in all 15 provinces of Cuba:

“I learned a great deal and was able to get to know practices that I hadn’t seen before, such as vermicomposting and the use of micro-organisms. For me, it is of fundamental importance that these techniques become known across the world, by all farmers.” Mamadou Coulibaly (CNOP-LVC, Mali)

“This is the proof that healthy food can be produced sustainably, in contrast to the myth we often hear that such production would be too slow and uncompetitive.” Nury Martinez Silva (FENSUAGRO-LVC, Colombia)

In ANAP’s Niceto Pérez National Training Center, professors shared with participants what they do in terms of training of trainers. They dynamically showed the basic principles of the Farmer to Farmer methodology, as well as techniques such as the participatory assessment, which uses indicator systems to analyze farms, identify local problems and classify farms based on their level of agroecological integration. In working groups, course participants prepared workshop proposals on subjects like soil conservation, sustainable livestock-raising, ecological pest management, and native seed production and conservation. Since course participants had widely divergent levels of practical experience in popular education, the course identified the need to further develop trainings in popular education within LVC organizations and processes.

If there were one principle that especially stood out, it would be the first principle of Farmer to Farmer: start slowly and at a small scale. By achieving rapid success at small scales, people remain motivated and are more inclined to reproduce the experience, as well as share it with others.

More than a method, a movement 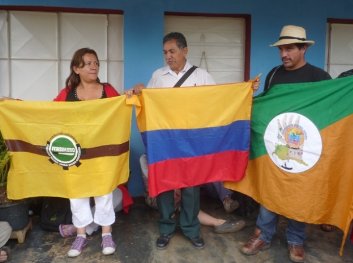 The truly impressive characteristic of ANAP’s national agroecological experience in Cuba is the amazing spread of small, local experiences. The “Special Period”—an economic crisis that initiated in Cuba with the fall of the Soviet Union in the early 1990s—forced the country to produce outside of the conventional model, abstaining from external inputs made unavailable by the economic blockade imposed by the United States. Despite this context, it was the transformation of a pedagogical methodology into a social movement that now appears to have been the key to the triumph of agroecology in Cuba.

“That is what impressed me. I thought that agroecology was a state policy in Cuba but now I realize that it is a decision of ANAP! An organization that exists since 1961 and in which the entire leadership took on the responsibility of implementing agroecology and the method.” –Nury Martinez Silva (FENSUAGRO-LVC, Colombia)

“If the movement is strong, the State has no option but to support it.” –Mamadou Coulibaly (CNOP-LVC, Mali)

As an organization, ANAP not only implemented the method as it existed—with farmer promoters and facilitators who organize trainings—but also added a new role, the coordinator, an ANAP cadre who acts at the municipal or provincial level to direct trainings and bring in allies among institutions and researchers working in the local territories where the movement is present. The entire system is maintained through ANAP’s cooperative structures at the base—each cooperative across the country has several promoters and a couple of facilitators, who work as volunteers unless the local cooperative is willing and able to pay them.

The relationship between ANAP and La Via Campesina

In a meeting with the top leadership of ANAP, the foreign LVC delegates presented their future plans, their commitment with Cuba and the ANAP, and also made petitions to ANAP.

The creation of a network of peasant agroecology schools in LVC is a key to the future strategy. Of these schools, the African schools in Mali, Niger, Mozambique and Zimbabwe, as well as the new Latin American schools in Nicaragua (IALA Mesoamerica) and Colombia (IALA Andina), were among the major examples debated during the course in Cuba. This network of schools needs to be understood globally, with all experiences analyzed and shared within LVC.

During the meeting, LVC declared its continuing solidarity with Cuba and in opposition to the economic blockade imposed by the U.S. government. In this sense, LVC committed itself to offer its capacities for international support. At the same time, LVC asked ANAP to widen its presence within LVC, given its inspiring example of successful implementation of agroecology at the territorial and social level. ANAP was asked to participate and take on an important role in the creation of the network of agroecology schools.

At the conclusion of the course, many spoke of the love that they felt for the Cuban people. “We share values,” said Ariel of CAN-LVC Colombia: “Dignity, Solidarity, Love and Unity!” 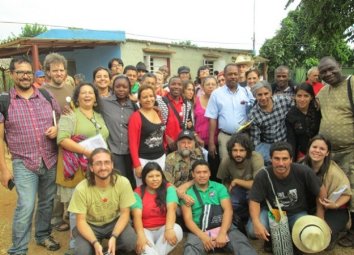 Over the duration of the course, it became evident that there needs to be more work done to clarify what agroecology means, in its systemic, integrated, holistic characteristics. In several moments, it was clear that agroecology is still sometimes understood simply as a technique. Agroecology is often presented as having three pillars: agricultural techniques, scientific research, and a social movement. Questions that emerge from the Farmer to Farmer methodology could be:

Should popular education be a fourth pillar of the agroecological proposal? Could this method, this educational philosophy, be a necessary condition for scaling-up agroecology? How can popular education help us re-think our organizations and structures? How can it modify our agricultural techniques, valuing them for their popular character? How can it change scientific research by seeing peasants as the scientists they are? In other words, wouldn’t agroecology be more coherent if we saw it, in all its aspects, from the perspective of popular education? This would mean that pedagogy needs to be in the center of all our processes, not only education and trainings, but also in organization and research.

Candles from Cuba to the world 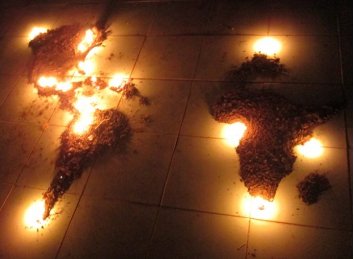 Without a doubt, there is much road ahead before agroecology becomes the new paradigm for global agriculture, despite the public recognition of this need by the UN. The two past weeks in Cuba with ANAP left as many questions as lessons for LVC. How can Farmer to Farmer be applied in each specific context, within countries dominated by neoliberalism? How can we pressure our governments at all levels to adopt our definition of agroecology, as LVC is achieving with food sovereignty? How can we guide public policy toward this strategic objective?

“I am leaving here thinking that the first task that I have after this course is to meet with the leadership of my organization and share what I have learned, so that they get as excited as I am, to begin to put this into practice with our base organizational structure.” –Nury Martinez Silva (FENSUAGRO-LVC, Colombia.

Agroecological revolution. The Farmer-to-Farmer movement of ANAP in Cuba.