Home » The WTO pushes through bad deal in the final hours; Developed countries and TNCs are the big winners

Social Movements for an Alternative Asia (SMAA), Gerak Lawan and La Via Campesina 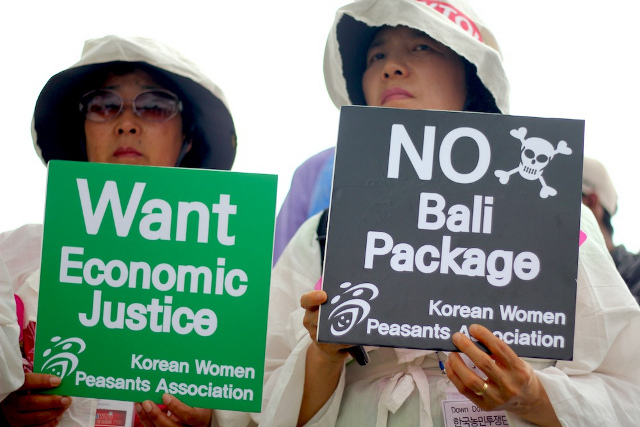 The 9th Ministerial Conference of the World Trade Organization (WTO) pushed through a Bali Package in the final hours, extending the Conference to December 7, but at the cost of the developing countries, the poor and the hungry.

Hailed as a victory by the WTO for unlocking the deadlocked negotiations, the Bali Package delivers a legally binding agreement on Trade Facilitation that is costly to developing countries and ensures easier access and profits for Transnational Corporations (TNCs). Trade Facilitation, or the easing of customs procedures and borders, clearly benefits only the big TNCs that already control exports and imports. As the 2013 World Trade Report data shows, “80% of US exports are handled by 1% of large exporters, 85% of European exports are in the hands of 10% of big exporters and 81% of exports are concentrated in the top 5 largest exporting firms in developing countries.”

Added to this, is the hypocrisy that this Trade Facilitation deal will open borders in all Member countries except Cuba, as it does not effectively cancel the 60-year long US blockade against the Cuba. The reference to the non-discrimination principle of Article V of the GATT 1994 remains pure rhetoric as it is stated in the Declaration and not in the text of the Trade Facilitation Agreement.

Peace Clause that jeopardizes the Right to Food

In exchange for the costly, legally binding agreement on Trade Facilitation, developing countries received nothing.

Finally, this peace clause is nonsense simply because no country should have to beg for the right to guarantee the right to food. Food and agriculture should never have been included in the WTO in the first place.

The issue of Export Subsidies remains a promise. It was already promised in the Hong Kong Ministerial Declaration that all export subsidies will be eliminated by 2013. Today, in the Bali Package, there is again only a rhetorical promise that “export competition remains a priority issue for the post-Bali work programme.”

In Cotton, a long-standing demand of African countries, also a promise in the Hong Kong Ministerial Declaration that never got implemented. Today, in the Bali Package the promise is to have “dedicated discussions” post-Bali.

The Bali Package has a Least Developed Countries (LDC) Package but with nothing substantial or meaningful. The special and differential treatment and monitoring mechanism are old unfulfilled promises that remain a declaration today.

In summary, the Bali Package delivers a legally binding text on Trade Facilitation, a very bad peace clause on food security that jeopardizes our right to food sovereignty, empty declarations and promises on long-standing developing country demands on export subsidies, cotton and the LDC issues.

We call for an End to the WTO; We demand Economic Justice

The WTO has once again shown that it is an organization for the developed countries and the TNCs, pushing free trade rules that only benefit the rich and concentrate even more wealth in the hands of a few. It has not and never will deliver development for the people.

The WTO is a failed and delegitimized institution that is desperately trying to revive itself with a Bali Package at the high cost of food sovereignty, livelihoods, jobs, and the future of the people.

We reiterate our call for an End to the WTO and the tyranny of the free trade regime. We redouble our efforts in fighting the system and pushing for the peoples’ alternatives. We will continue our struggle to achieve a world without the WTO and free trade agreements and in its place have an Economy for Life.