Pathak Lal Golder
Indigenous peasants of Bangladesh should get their due constitutional rights including access to justice and land rights if they are to contribute to the nation, Bangladesh Krishok Federation (BKF), Bangladesh Kishani Shaba (BKS) and Bangladesh Adibashi Samity (Indigenous Association) said at discussion marking the 153rd anniversary of Indigenous Peasants revolution at 30 June 2008. The leader of BKF, BKS and BAS paid tribute to the Indigenous heroes including Shidhu, Kanu, Chand and Bhairab who was the leader of that revolution against the then British regime. 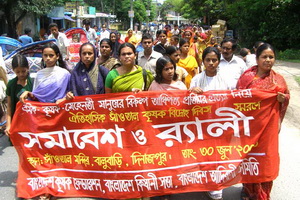 The indigenous people’s demand includes their constitutional rights, separate land commission, ensuring easy access to education, water and forest resources and access to justice for indigenous people. Discussion, procession and placing of floral wreath in memory of the martyrs marked the anniversary of Indigenous peasant Revolution.

Demanding access to education and justice and forest resources for the indigenous people, they said proper distribution of khas (fallow) lands among the indigenous landless people is needed to enable them to survive and contribute to agriculture.

Repression on the indigenous people must go and constitutional recognition and housing rights should be given to them, speakers said at the meeting.

They also urged the government to allow quotas for indigenous people in universities, colleges and government jobs, better chance for getting scholarships at home and abroad.

Primary education for the indigenous children should be given in their mother languages, they said.