Home » WTO Out! Doha round is a problem, not the solution for the food, energy and financial crisis 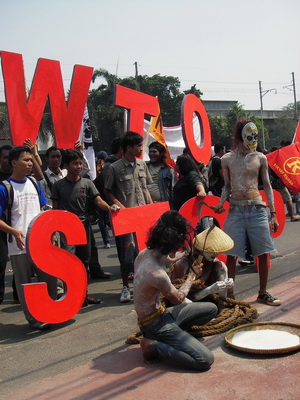 Jakarta, July, 21, 2008—Responding to the WTO mini-ministerial meeting, we are from Gerak Lawan, a broad coalition of Indonesian people's movements. We feel it is pertinent to alert the Government of Indonesia (GOI) and the people to the major issues at stake if you agree to the proposals for agriculture and nonagricultural market access (NAMA) and services that are on the table for the Doha Round in Geneva on July, 21-26.

The current food, energy and financial crises were caused by a terrible mode of production and consumption promoted by developed countries—and also by the international regime that is represented by the WTO, IMF, and World Bank, and enforced through free trade agreements (FTAs), both bilateral and regional.

The fact is the WTO will only exacerbate the current global crises. The resumption of WTO negotiation will not solve the basic problems in Indonesia, or the poverty and inequality that result from the development process. Concluding the Doha Round will not solve the problems of agricultural markets. Even worse, it will destroy other sectors, such as the manufacturing sector. Furthermore, WTO negotiation will undermine people's access to services—especially public services.

We acknowledge the proposal by Indonesia and other developing countries (G-33) in the WTO negotiation of a Special Product and Special Safeguard Mechanism (SP/SSM) as an effort to support food security, livelihood security and rural development. We encourage them to stand on their position and request that they emphasize that food is not solely a commodity to betraded. We reject the compromise of the G-33, which is on the verge of a trade-off in the WTO negotiation, for supporting food security and moving toward food sovereignty, livelihood security and rural development in each country are state obligations. The G-33 countries must protect the people's interest first, before profit.

The current Doha package is a bad deal. It serves the private interests of the biggest corporations around the world, most of them headquartered in the developed world. WTO negotiations failed in 2006, and on many occasions since thirteen years ago. Therefore, it is not the solution for today's food, climate, financial and energy crises. It is time for a new approach to the multilateral trading system—one that focuses on policies that promote people-centered, ecologically sustainable development. Finally, it is time for GOI to stand for the Indonesian people, and to protect and develop the people: including peasants, small and medium producers, fisherfolk, workers, migrant workers, urban poor, youth, women, and environmentalists. It is the only true solution to the crisis.