Home » 25 Years of feminism in La Via Campesina : Reflections from Women’s Assembly at the VII International Conference

19 July 2017: The International Conference of La Via Campesina (19-22 July 2017) was preceded by the V Women’s Assembly on 17 and 18 July, in Derio, Basque Country. In this Assembly, Francisca Rodríguez, member of the National Association of Rural and Indigenous Women (ANAMURI) in Chile and also known as Pancha, gave a historical overview of feminism in La Vía Campesina.

Pancha recalled that in 1992, when peasant agricultural organizations of Central America, the Caribbean, North America and Europe first met in Managua, Nicaragua, with the idea of building a great peasant movement, there was no participation of women.

The political process led by peasant women—which would take some time to consolidate—began one year later, at the First Conference of La Vía Campesina in Mons, Belgium in 1993. There a small group of women peasants discussed the participation of women in La Vía Campesina’s processes. They spoke out in favour of a more inclusive final declaration of the Conference and of the recognition of the right to land for both men and women. At this same Conference the women identified 10 areas of work, one of which was gender equality, the principle that men and women are equals and that social values must be based on solidarity and equality. “This was the first discussion we had about feminism. And from then on we were feminists,” said Pancha, who was witness and in part the architect of this beginning of the construction of feminism in La Vía Campesina. 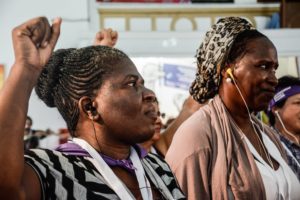 At the third Conference, held in Bangalore, India, gender parity was finally achieved, in that the number of participating men and women was the same. This specific process had been driven by the women of the Latin American Coordination of Rural Organizations (CLOC), who in those years were already at the forefront of the peasant feminist discourse. In this same space La Vía Campesina launched a global campaign on seeds. Seeds are considered the fruit of indigenous and peasant labor and a reflection of the history of the peoples, and especially women as their creators and guardians throughout history. Discussions also began there on the Declaration on the Rights of Peasants which, according to Pancha, should be revised as “it does not speak out strongly against violence against women.”

Subsequently, the global campaign ‘Stop violence against women’ was launched at the movement’s fifth Conference in Maputo, Mozambique in 2008. “This refers not only to domestic or organizational violence, but also to systemic violence, which is very hard for men, but twice as hard for women,” stressed Pancha. In its subsequent Conference, held in Jakarta in 2013, La Vía Campesina prepared a roadmap for the empowerment of rural women. They also saluted Latin American feminists who continue to build a new world based on social emancipation.

In this seventh Conference of La Vía Campesina, the proposal of women peasants is to achieve consensus on what the movement understands by “peasant and popular feminism”.