Home » Young people of La Via Campesina Close their Assembly with a Commitment to Ensure the Future of Sustainable Peasant Agriculture. 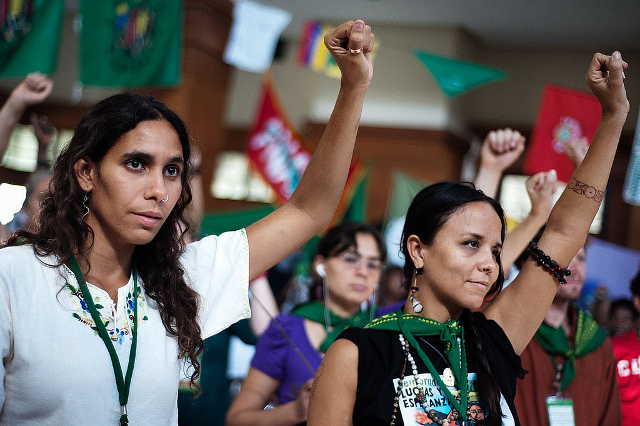 (Jakarta, June 9, 2013) “We, the Youth, are the seeds, we are the future of the peasant movement”. These were the closing words of the La Via Campesina’s Third Youth Assembly, which has brought people together from more than 70 countries on five continents. The discussions dealt with wide-reaching concerns, such as food sovereignty and peasants’ rights, but also focussed on specific issues such as health or migration. The slogan proclaimed during the meeting was “For food sovereignty! La Via Campesina youth in struggle!”

Feeling that they represent the present and future of sustainable peasant agriculture, “able to cool Mother Earth”, young people have designed a plan of action, which establishes specific actions to be taken by La Via Campesina’s regional structures, and by young farmers from all over the world.

The Declaration of La Via Campesina’s Third Youth Assembly, which was approved this morning in Jakarta, identifies the enemies that hinder sustainable development around the world, such as neo-liberalism, capitalism, and imperialism. Bearing this in mind, the young people commit themselves to fight against industrial agriculture and land grabbing, GMOs and the privatization of the commons.

They also appeal to international organisations such as the WTO, IMF and World Bank to respect people’s rights to plan and control their systems of food production.

Others commitments endorsed in today’s declaration include strengthening solidarity links between regions which are developing alternative models, always looking for ways to co-operate to eliminate social inequalities. The declaration also insisted on the importance of political education for young people, of communication and coordination, and of solidarity with all peoples who are fighting for their rights, wherever they are in the world. However, the young people’s main commitment has been to work for social change and for a return to the land, starting from the perspective of agro-ecological production.

At the end of the Assembly’s closing ceremony young people marched in procession to the inauguration of the peasant market organised for the Sixth Conference of La Via Campesina.

Communication team of la Via Campesina