Opening of the 3rd International Assembly of La Via Campesina Youth 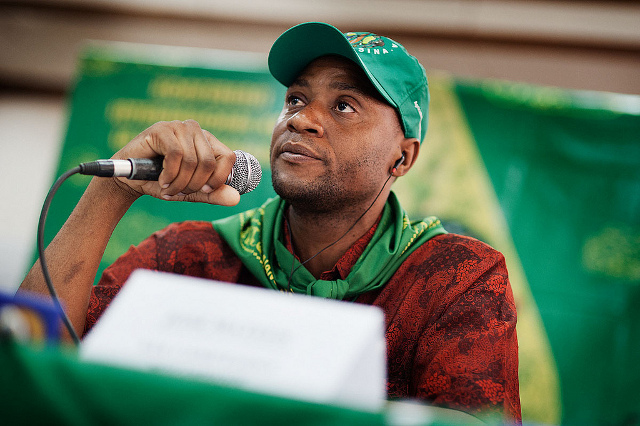 Jakarta, 08th of June – The sound of Viva Peasants Youth, Long Live Via Campesina (LVC) Youth swept through the Agrarian Reform Room at the Padepokan Pencak Silat in Jakarta Indonesia. The Third Youth Assembly was off to a good start with a traditional Indonesian Dance to open the assembly. The mood of joy and togetherness shone on the faces of many youth and their mentors who were gathered for collective debates which will generate decisions that will give way to the creation of a common mobilization agenda for the youth in the peasant movement.

Thirty three year old Ayumi Kinezuka a tea farmer from Japan says as a young farmer, she is disturbed by the continuous movement of young people from the rural farming lands into Tokyo in search of corporate jobs. This leaves an aging population of over 65 years in the rural areas. This creates loss of bio diversity and traditional agriculture suffers.

“Young people must take up traditional agriculture to fight the government’s idea of promoting monoculture and promoting use of Indoor factories to grow vegetables using chemicals and artificial light instead of the sun. Such unnatural technology is not sustainable and we have to show the alternative of small scale sustainale farming with its roots in the rural communities. Our culture is connected to nature,” Kinezuka says.

Another youth, 32 year old Shinya Takeda who is a youth leader in rural Japan says many young people are starting to move back to the rural areas and take up farming land. They have realised that the corporate urban life is stressful as some 10,000 people die every year in Japan from stress related diseases and job pressure.

“I want to see the youth go back to the villages and take up the land. The government has promised to give 1.5 million Yen ($15,000) a year for youth to concentrate on farming. But it is difficult to earn a living out of farming alone in Japan unless you are from a rich family with over 10 hectares of land. The average being less than 2 hectares for many young farmers,” Takeda says.

Henry Saragih the general coordinator of LVC in Indonesia opened the discussion and said Indonesia is so proud of the youth from South East Asia who attended the youth conference because it is a wide momentum for them. He said that in the farmer’s hands the world can be safer, the main problems of hunger, economic crises and energy crises that are ruining our lives and creating conflict will not be solved without the input of peasants.

“Soekarno said give me 10 youth and we will change the world. You are more than ten and I believe from La Via Campesina we can solve the problems happening in this world. Farmers are concerned about how to cultivate the land. We are talking about seeds, the land and water. If guaranteed we can live better together and feed everyone,” Saragih said.

Juana Ferrer from International Coordination Committee said that great commitment and bravery has been shown within the organisation and process of building LVC. The youth have taken on the great challenge of derailing capitalism and neoliberal policies. Their commitment is ever deeper. Many of the revolutionary successes and social changes being mobilised around world are because of the strength of young people.

“This reflects the responsibility of moving forward and building our movement. This helps us to show resistance and fight for youth sovereignty, lets globalise this struggle lets globalise our hope,” Ferrer said.

In the global context Jose Alfredo Urena a member of parliament from Venezuela said that the youth the pleasure of the earth and future of humanity. We need to start thinking about their future and planet. The planet now not only faces multiple crises; food crisis, climate crisis, energy crisis, financial crisis but also a crisis of morals and ethics on a global level. The cause of these crises is the neoliberals’ capitalist model spread across the world.

“Venezuela is one of the few countries that is challenging neoliberal model. It does not owe money to the World Bank thanks to Hugo Chavez. We want to topple multinational companies who damage the lives of the peasants. We have to debate if the FAO is meeting the needs of peasant farmers in the world and it is providing peasant farmers what they need,” Urena said.

Nettie Wiebe from Canada addressed the youth assembly on globalisation and its impact on food and agriculture for example the spread of new and risky corporate technology.Neoliberal systems are not really concerned about production of healthy food or the wellbeing of the peasants but solely concerned about their own financial profit. This has changed how we farm and agricultural technology.

“From my generation we underestimated what technology would do. We imagined that we could have more and more powerful technology without endangering the natural systems around us. Industrialised agriculture changes everything from GMOs, power sources and energy sources that are increasingly relying on fuel to grow food. All this has consequences on nature and human health,” Wiebe said.

In 1996 in Canada there was eager adoption of GMOs. 10 years later farmers realised it was not a good thing. GMO contaminated wheat and there are fears that GMOs are contaminating all seeds. In that case the corporate sector takes no responsibility and leaves it to the farmers.

“They have introduced a new rage of problems for us. The cooperate world is telling us to be more careful that it’s not their problem it is the farmer’s problem. We are confronted now with climate change, displacement and resistance. We have to confront the whole climate change in a persistent way because it’s a key problem. We are going to see more and more climate disaster refugees, there is no one more affected than those who depend on the weather to survive and cultivate. Global warming and global storming is a big problem,” Wiebe said.

She said that the key is to unite work together because that is our way forward. The youth ended the assembly with a commitment to do just and become more active in LVC, unite their diverse struggles from access to globe and globalise hope to build a future where small farmers will become the key actors to grow the world food and protect the environment.

* A journalist of the Observer, Uganda