Home » Yes, there are peasants in Europe and their rights must be protected 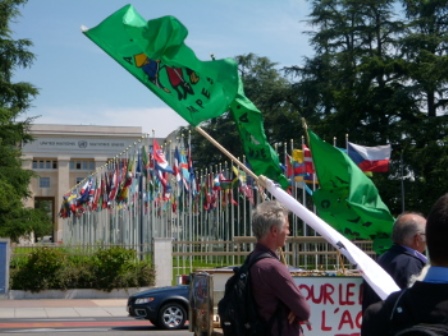 (Geneva, June, 22 2015) – the European peasant organisations of the Via Campesina and their allies (FIAN, CETIM, Mundubat, Pain pour le Prochain) met in Geneva for three days at the beginning of June 2015 in order to meet with European representatives and discuss the new draft of the Declaration on the rights of peasants and other persons working in rural areas.

This workshop followed the second session of the open-ended intergovernmental working group for the United Nations Declaration on the rights of peasants, which was held at the Human Rights Council in February this year. Florence Kroff of FIAN Belgium explained, “In light of the poor participation of representatives from European Union member states in this negotiation session, it seemed vital to us to organise a specific meeting with the European Union delegations to Geneva, in order to discuss the important content of the Declaration and provide perspective as experts and as European farmers.”

Geneviève Savigny, from the Confédération paysanne in France, has followed the proceedings for ECVC (European Coordination Via Campesina) for several years: “The meeting here in Geneva between European farmers and peasants has shown afresh that the difficulties, discrimination and marginalisation experienced by the peasants resemble those between European states as much as between the Global South and the Global North. This reinforces the relevance of a Declaration on human rights such as that adopted by the United Nations”.

On 4 June, representatives of the ECVC and its allies were able to speak at length with the Permanent Missions of European States to the United Nations at a meeting of experts on the rights of peasants, which took place at the Permanent Mission of the European Union and was hosted by the representatives of Luxembourg, in preparation for their presidency of the European Union from July to December 2015. Olivier De Schutter, one of the experts present, said unequivocally: “In the present context, this Declaration makes sense not only because there are numerous violations of peasants’ right to food as a result of the extreme poverty affecting them, but also because there is an urgent need to recognise the specific and emerging rights of peasants”. Wolfgang Hess, a German peasant (ABL), has been able to illustrate the experts’ findings by giving evidence of the problems consistently faced by young people and peasants seeking to settle in Europe: “The land speculation in Europe is increasing. And if, in theory, States say that they favour sustainable agriculture, the reality is completely different: European farmers are always pushed to export and to expand their farms in order to cover their costs”.

“In September 2015, the Member States of the Human Rights Council are set to announce the extension of the mandate of the intergovernmental working group tasked with developing the United Nations Declaration on the rights of peasants. We call upon our representatives from Member States of the European Union to respect our international commitments by voting for the protection of millions of food producers around the world, guardians of our Mother Earth, and for the livelihoods of future generations,” added Sandra Moreno of SAT-SOC (Andalusian agricultural workers’ union, an ECVC member).