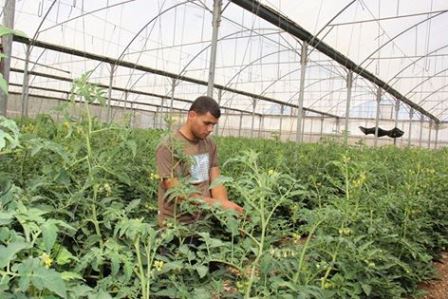 (Palestine, Ramallah, July 2015) The Union of Agricultural Work Committees (UAWC) issued a report about the achievements and projects it conducted in the West Bank and Gaza Strip last year. The report pointed that there were 30,184 beneficiaries from UAWC’s projects in 2014. UAWC mentioned in its report that 15 projects have been implemented during 2014, including five relief projects that benefited 19,964 families affected by the latest Israeli occupation’s aggression on Gaza Strip and 19 projects in the West Bank benefiting 10,220 poor and marginalized families in more than 152 villages and towns, particularly in areas “C”, where the Israeli occupation has restrictions over national and international organizations work in these areas.

UAWC’s acting director, Fuad Abu Saif, confirmed that UAWC has been able, despite all the obstacles and challenges, to play an important role in area (c), where the Israeli occupation has full control over lands and resources to expand their settlements and the Apartheid Wall.

UAWC focused on land reclamation and rehabilitation, which is one of the most important agricultural programs in Palestine; since these projects preserve the land from the Israeli confiscation. Therefore, UAWC reclaimed 325 dunums, and rehabilitated 174.5 dunums in the West Bank, in addition to the reclamation of 2,512 dunums, and the rehabilitation of 2,383 dunums in Gaza Strip. Moreover, UAWC worked on the cultivation of more than 2,000 dunums of fruitful trees, field crops and vegetables in addition to opening and rehabilitating 110 kilometers of agricultural roads.

Regarding small income-generating projects, the number of projects that have been created or strengthened over the past year reached to 187 projects, of which 121 projects in Gaza Strip, and 66 projects in the West Bank. While these projects increase continuously in the light of UAWC’s objectives and its deep belief in the importance of the fight against poverty and reducing the unemployment rate, which has reached to very high levels, because of the economic conditions. In addition to, the roles of these projects in mitigating the impact of the Israeli violations, since they consider development tools that are not linked to big economies and can effectively strengthen poor families’ steadfastness especially in marginalized areas.

Regarding the water resources development sector, UAWC drilled 357 agriculture wells, and established 4 concrete earthen ponds with a size of 3,000m3 . As a result, 40,000m 3 is collected for water harvesting. Moreover, UAWC linked more communities and agricultural lands with water networks through the establishment of 62 kilo meters of carrier lines, which contribute to increasing of agricultural area and encouraging investment in the agriculture sector. Moreover, UAWC established 4 new water tanks with a size of 2000 cup, which are used to irrigate protected crops.

In term of livestock sector activities, UAWC created 363 fixed and mobile animal farms and one typical farm in order to train farmers on modern farming techniques and increase their productivity. In addition, UAWC distributed 360 veterinary bags for 360 farmers from different areas, and provided veterinary support for 2,300 of sheep breeders, through four mobile veterinary clinics that are supervised by a competent physician.

In the fishing sector, UAWC worked on rehabilitating boats, providing fishing nets for 2984 fishermen, creating jobs for 527 fishermen, establishing 25 rooms for hunters and a central fish market, distributing 1,382 food parcels to fishermen during the Israeli aggression, and building fishermen capacities in different subjects. Moreover, 13,431 farmers, marginalized fishermen, sheep breeders and poor families benefited from emergency projects. During 2014, UAWC built the capacity of 48 agricultural cooperatives in the West Bank and 16 cooperatives in Gaza Strip, as well as establishing a “cooperative company for the production and marketing of crops” Concerning grassroots and advocacy level, UAWC organized national, local and international activities through their agricultural committees to strengthen the Palestinian farmers’ steadfastness, particularly in areas around the Apartheid Wall and settlements.

Moreover, UAWC succeeded through their legal follow-ups to freeze the confiscation orders on 5,511 dunums and 7 demolishing orders and stop-work orders. It should be noted that UAWC won two international awards. UAWC through its exceptional National Bank for Local Seeds won the Equator Prize, which is United Nations Development Programme “UNDP” initiative. UAWC’s award winning initiative is indicative of its important role in promoting the concepts of sustainable growth and the fight against poverty. Also, UAWC won the ” US Food Sovereignty Prize”, which is awarded by the US Food Sovereignty Alliance (USFSA).

These achievements come in the light of UAWC’s national and development role in the empowerment of farmers and their families and strengthening their steadfastness, thus creating agricultural prosperity in the face of the Israeli violations and their control over Palestinian land and resources.