Home » Women’s Assembly evaluates its global campaign to ‘Stop the Violence Against Women’ and makes plans for the future.

News from La via Campesina

Global Campaign to Stop the Violence Against Women

(Jakarta, June 7,2013) The global campaign pioneered by La Via Campesina to Stop the Violence against Women is celebrating its fifth anniversary. The last five years have seen significant advances, the fruit of all the work and struggle that women have put into this campaign in all the regions which have taken it on board.

The campaign was born in 2008 with the aim of putting an end to all forms of violence against rural women. Now, five years later, around 300 women peasants and small-scale farmers from around the world have met in Jakarta under the banner of the Fourth Women’s Assembly of La Via Campesina, which today has been discussing how to continue the campaign in each region. 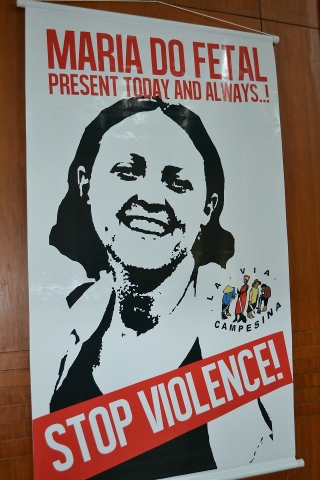 The IVth Women’s Assembly pays homage to Maria Do Fetal, who was murdered by her boyfriend in the city of São Paulo last January. A Portuguese citizen living in Brazil, she had been involved in supporting the Landless Peasants’ Movement (MST) and La Via Campesina in Brazil and internationally. Amongst many other activities, Maria was part of the interpreters’ team for La Via Campesina’s Fifth International Conference in Mozambique in 2008. She was actively involved in the Campaign to Stop Violence against Women, and as an interpreter particpated in many of La Via Campesina’s other activities. We pay homage to her in this Sixth Conference – she is present in all our hearts.

Taking the campaign strategy forward in the regions.

Violence against women is a worldwide phenomenon which cuts through all social classes, regions, sexual orientations and generations. La Via Campesina, as an organisation which brings together more than 150 local and national organisations in Africa, Asia, Europe and the Americas, provides the opportunity for women from different regions to share their visions. In this Fourth Women’s Assembly regional groups have been working to progress with a strategy for the coming years which could reinforce and give continuity to the campaign against violence in all countries. “It is important that La Via Campesina continues to deepen the analysis contained in the document we wrote previously, which was about the evolution of the struggle against violence against women globally”, explained Juana Ferer Paredes, a Via Campesina activist from the Dominican Republic. As Paredes made clear, it is essential that this material can serve as a point of reference for the struggle and for La Via Campesina’s internal process. “Within our organisations we need to talk more about feminism and what it can contribute, so that we can make progress towards the goal of equality between women and men.”, Paredes remarked.

Stopping the violence against women in Asia.

“What we wish for is that women can live in peace, in their neighbourhoods, in their families and in their countries”. Mazdalifah, from North Sumatra

Mazdalifah, a woman peasant from North Sumatra, gave us an analysis of the situation facing women in Asia. Mazdalifah is actively involved with La Via Campesina’s women activists, and is implementing the campaign to stop violence against women in Asia. “The campaign was launched in South Korea in 2008, working together with the Korean Peasant Women’s Association”, Mazdalifah related. “We facilitated training for peasant women around the campaign’s main themes, and in Malaysia, for example we also tackled the issue of land defence”. In Indonesia itself, Mazadalifah explained, the campaign was started on World Food Day in 2010, at an action about rice. The campaign was recently launched in East Timor, where women and children continue to live in subhuman conditions, whilst multinational companies have occupied a lot of land to produce petroleum”.

Mazdalifah also explained the difficult situation facing women in Thailand, where they are obliged to work from a very young age onwards , and receive to protection from the state. “Domestic violence takes place in a third of households in China, which comes to 270 million families”, she added. These figures are cause for serious concern, Mazdalifah explained, stressing the importance of putting an end to all forms of violence by bringing the message to all women and men”. The message needs to be put in a way which will resonate with the general public, otherwise the campaign will never manage to achieve its aim. Mazdalifah believes that it is important to adjust to the local customs of the people we are trying to reach, which will be different in each region.

One of the resolutions was to reaffirm the 8th of March as the International Day of Women’s Struggle, and the 25th of November as the Day of Action against Violence towards Women.

The communication team of La Via Campesina