Home » “We want people to feel proud of feeding the population!”

News from la Via Campesina : Interview with Papis, a young peasant from Senegal. 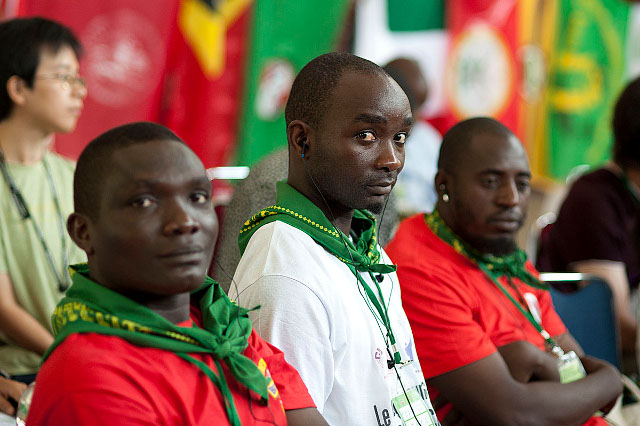 (Jakarta, June 8, 2013) Today saw the beginning of the Third Youth Assembly, part of the Sixth International Conference of La Via Campesina which is taking place in Jakarta, Indonesia. After two intense days of women’s meetings, today it is young people from around the world who fill the corridors of the conference, discussing and sharing their experiences as young farmers, both men and women. Plenaries and working groups set up for the event have provided a space to tell of their struggles, their achievements, their setbacks and their new ideas.

Papis came from Senegal to Jakarta in Indonesia to participate in La Via Campesina’s Sixth Annual Conference, and join in the young farmers’ meeting. He is involved in the Dakar Poultry Farmers Association (Association des Aviculteurs de Dakar (AAD). He lives in a village close to Dakar, in Senegal, and is a peasant who devotes his life to the land and to poultry farming. Papis is young and full of energy. After living for two years in Italy and one year in Portugal he decided to return to Senegal to start this project, and today he feels proud and content.

Can you explain me a little bit about the situation facing young peasants in Senegal?

The current situation in our country is that farmers are ashamed to admit that they are farmers. The problem is that farming isn’t valued as a profession. And that’s the reason why we, as Senegalese peasants, believe that our primary objective is to work towards a greater appreciation of the peasant identity. Peasants should be proud of what they do.

In Dakar airport, on my way to Jakarta, when I was given a form to fill in, I wrote “peasant” in the space for my occupation. When the policeman checked it, he said “peasant?” because he found it bizarre that a peasant would be travelling internationally. Sometimes when you say you are a peasant people look down on you. They think that a peasant is someone with ragged clothes who shouldn’t be travelling.

Can you explain a little about your profession?

I have my own family business. I’m involved in aviculture, so I raise chickens. I produce a million eggs a year and more than 24,000 chickens. I also sell produce in the market and I grow vegetables. In short, I am one of the people who is feeding Senegal, which is a big source of pride for me. It’s important to feel proud if you are feeding the population!

Before this, I was a migrant in Europe. I was in Italy for two years and Portugal for one year more, but in the end I made my own decision to return to Senegal to raise chickens and plant crops. I earn less than I did in Europe, but at least I am free to do anything I want.

What is the most interesting aspect of the Youth Assembly, for you?

It is necessary for people to meet, and I think that now we need to start working towards 2014, which is designated as the year of family farming. We need to make 2014 the year of young people in agriculture, so that more people get interested in agriculture.

Today I want to tell you that our profession is the most noble there is, because we feed the world. People need to be aware of that.

Communication team of La Via Campesina