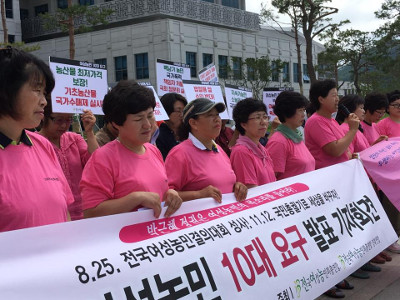 Peasants from the Korean Women Peasant Association are taking out a nation-wide campaign, in the form of a protest tour, to seek justice for Farmer Baek Namgi who has been lying in a state of coma since November 2015, after being hit by police water cannons.

The peasants would also seek for the establishment of a department with experts who could help formulate policies for the women peasants and also seeking progressive amendments to the Women Farmers and Fisher Women legislation.

The campaign would also cover provincial issues and national issues and demand urgent attention and action on issues such as minimum pricing and assured buying by government of agricultural produce.

Peasants in South Korea, the campaigners say, are faced with immense difficulties putting the food security and a sustainable peasant future at grave risk. 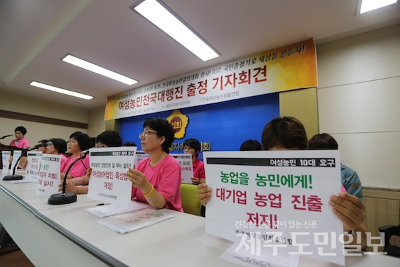 They squarely blame the governments open policies on agriculture that encourage entry of big corporations who blatantly violate peasants’ rights. They deplore agricultural policies of the government that are led by profit intentions and that ignore its vital multifunctional importance. The campaigners will highlight the dangers of GMO and are demanding a future based on food sovereignty.