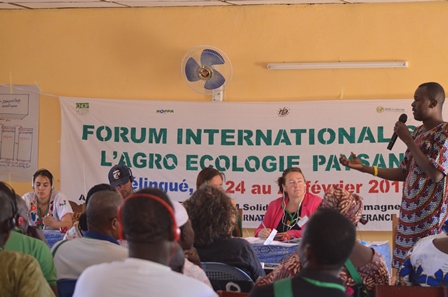 Report of the International Forum for Agroecology, Nyeleni, Mali is now available

In a new report launched today, small scale food producers present their first ever common vision on agroecology for Food Sovereignty to Governments assembled at the Committee on World Food Security. Representing the producers of 70% of the world’s food, they call for an immediate transformation of food system towards agroecology.

“Agroecology practised by small scale producers generates local knowledge, promotes social justice, nurtures identity and culture and strengthens the economic viability of rural areas,” states the Report of the International Forum for Agroecology at the Nyeleni Center, Mali. “Agroecology is political; it requires us to challenge and transform structures of power in society. We need to put the control of seeds, biodiversity, land and territories, waters, knowledge, culture and the commons in the hands of the peoples who feed the world.”

The common vision was developed at the historic Forum through dialogue among food producers such as peasants, artisanal fisherfolk, the landless, rural workers, indigenous peoples, hunters and gatherers, pastoralists and nomadic peoples, urban communities and consumers. They warn against the corporate co-optation of agroecology through initiatives such as Climate Smart Agriculture. These attempt to redefine agroecology as a narrow set of technologies without challenging the industrial food system, or its existing structures of power.

Small scale food producers demand that policy makers respect and reinforce their agroecological processes rather than support forces that destroy them. These producers represented in the International Planning Committee for Food Sovereignty will continue to promote this common vision, including at the CFS and FAO regional seminars on agroecology in November 2015. This report is a start of an evolving dialogue by social movements to build a better world based on respect, social justice and solidarity. They call on all civil society organisations to strengthen the movement for agroecology and endorse the Declaration of the International Forum for Agroecology! Download Report