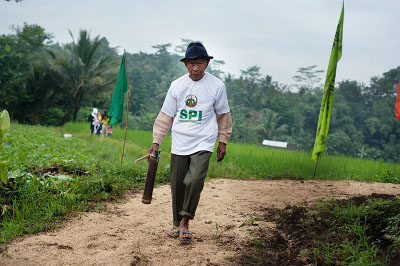 In July, Serikat Petani Indonesia (SPI) which is also known as the Indonesian Peasants’ Union is celebrating 18 years of its struggle for genuine agrarian reform and social justice.

“Starting from a base level to the international level. Starting from reclaiming hundreds of thousands of hectares of land, to fight for the rights of peasants into an international declaration on the UN Human Rights Council in Geneva, Switzerland, SPI has come a long way in 18 years. “said Henry Saragih in Medan, North Sumatera, Indonesia. 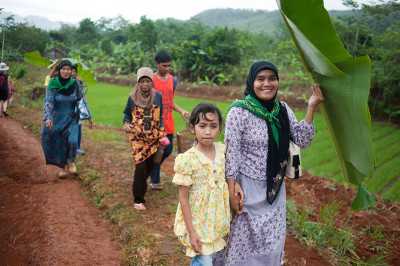 Henry added, SPI will strengthen its internal organization and build and strengthen peasants cooperatives, to support the economy of the peasants. “God willing we will wake up hundreds of cooperatives,” he told hundreds of participants who present at the 18 year celebrations.

Zubaidah, Head Chief of SPI in North Sumatra province mentioned that in 18 years SPI has been transformed into one of the largest peasant mass organization in Indonesia. “During the several ups and downs of this organization we have traveled together. We will stay together to make food sovereignty a reality,” she said in Medan.

Muhlasin, Head Chief of SPI in Lampung province called upon the need to build on the quality of the movement and the organisation. “Starting by building militancy, knowledge, skills, to complement the stewardship from DPW level up to the base,” said Muhlasin in Lampung. Muhlasin hoped that in the future, SPI will be useful not only for its members, but for all the Indonesian farmers and peasants overall.

“God willing, if we’re all serious, SPI will be even greater in the future,” said Muhlasin while cutting rice cone made specifically for the anniversary.

In Batang, Central Java Province, Mugi Ramanu, member of  National Peasant Assembly (MNP) of SPI hoped for SPI to realize genuine agrarian reform, food sovereignty and social justice. “SPI must continue to push the government, for agrarian reform immediately executed by Jokowi in his second year as a President of Indonesia. Hopefully the Presidential Regulation can be completed this year, “he stated.

“We, at SPI also must be ready, cultivate and transform those  9 million hectares of land into productive farmland for food sovereignty in Indonesian,” he concluded.